When people use Wi-Fi routers to set up network at home or office, there are always some Wi-Fi dead spots. In order to expand Wi-Fi coverage area, a new mesh network technology is invented to provide more coverage. This new technology is an interconnection mesh network with multiple Wi-Fi nodes. Most Wi-Fi mesh systems can help you extend the signals even further, providing solid Wi-Fi coverage from end-to-end.

Because of the rising number of similar Mesh Wi-Fi AP products on the market, customers may struggle to find the one that meet their expectations. We’ve selected three popular Wi-Fi Mesh APs to evaluate them against the performance testing as listed below:

At multi-user scenarios or heavy traffic load scenario (ex: 4K video streaming…), it would be a challenge of transmission speed to provide reliable network service.

Mesh AP setup cost is high when the coverage of Mesh AP is not sufficient, then customer will need more Mesh APs to cover the whole area.

Since users can switch to alternative Mesh AP when the Wi-Fi signal is weak, users can roam from room to room, that is so-called “roaming”. Most of the Mesh APs lose speed after roaming which result in bandwidth-consuming applications encounter lag or stutter. (Streaming 4K contents or downloading video …etc.)

These problems will eventually increase customer complaints of the products, and even be returned, which will ultimately have a negative impact on the brand reputation. The following is a comparison of three different Mesh APs.

As shown in Figure 1, the Host PC is connected to the Mesh AP by LAN.  Laptop is connected to network via Mesh AP and then the Host PC and laptop are tested for transmission speed. In addition, as defined in the IEEE 802.11 standard specification, to achieve VHT MCS9 modulation rate, laptop needs to be placed at -50dBm signal strength location.

Generally, the Mesh AP is usually placed in a weak signal spot for extending wireless coverage. We observed roaming mechanism and found that when the user network connection with RSSI is lower than -65dBm, it will trigger roaming. Therefore, we use -65dBm as the benchmark to compare the signal coverage of Mesh APs. As shown in Figure 2, we use shielding box to simplify the test environment. The position of the -65dBm signal strength is found by distance sniffer away from the Mesh AP1.

This test is proceeded under LoS (Line of Sight) transmission space. In Table 2, Linksys standout with the widest 2.4GHz signal coverage among others; the 5GHz signal coverage is not much different (Almost 90 meters).In conclusion, Linksys’ signal coverage is relatively good. For customers, Linksys can use the minimum number of units to ensure complete signal coverage, which can save unnecessary cost, and there is no need much consideration of the deployment.

According to Table 3, both results of 2.4G and 5G wireless signal coverage are over 90 meters. But there are some other factors that can reduce Mesh AP coverage: deployment of the furniture, interior design and the characteristics of the building materials. It is still possible that for some large space or multi-floor fields, such coverage is not enough. So it is recommended to perform the TR-398 coverage test. The coverage test of TR-398 uses an attenuator to simulate the test distance, then make the transmission rate as the criteria for determining the coverage capability of the wireless product. TR-398 provides different aspects of testing coverage, giving us a deeper understanding of wireless product coverage.

As shown in Figure 3, users automatically switch to alternative Mesh AP in motion without interrupting Wi-Fi connection. This process is known as roaming. Before executing the test, the signal strength of the Mesh AP1 needs to be confirmed as -65dBm from the position of the Mesh AP2. Then user connects Wi-Fi to the Mesh AP1, and start moving from Mesh AP1 to Mesh AP2. Checking if roaming is happening or not during the period. After confirming the roaming point position, the three test points before and after the roaming point are tested and averaged. The average result of transmission rate objectively shows that the trend of transmission rate after roaming is drop or rise.

Figure 4：Average Transmission speed before and after roaming

Table 4 shows the transmission speed before and after roaming.  Generally, the 30Mb/s speed of the network is required for 60 frames per second of 4K Ultra HD video streaming, and Table 3 shows that regardless of 2.4G or 5G, Linksys can provide services to more users on 4K streaming after roaming, while other brands lose speed after roaming, resulting in fewer 4K streaming users in service. As a result, Linksys has the best roaming benefit. 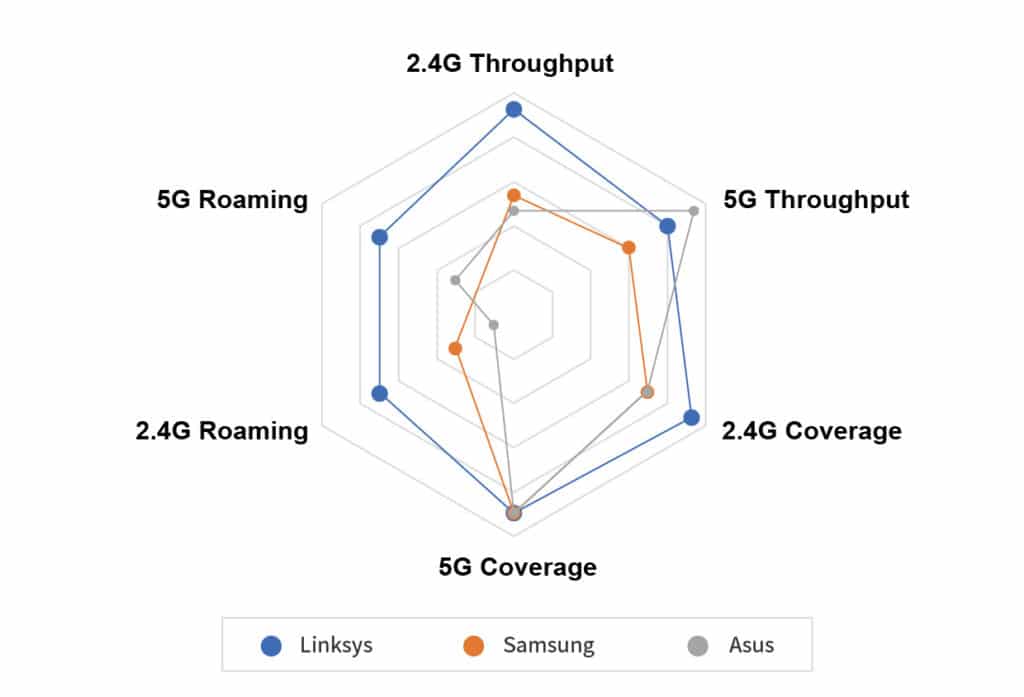 As shown in Figure 5, each Mesh AP has different performances at each test case. These tests are designed mainly based on user experiences. However, during the development of wireless         products, there are still other factors that will affect their wireless performance. As an experienced testing company, Allion can assist you to develop more competitive wireless product of the market.

Post Views: 1,201
Technical
Latest technical blog
This site uses cookies. By continuing to browse the site you are agreeing to our use of cookies. OkFind out more here