Allion Labs > Technical Blogs > Shaping 2017! A Taste of the Course to Come

As CES marks half a century of bringing innovation to the world, there were over 3800 vendors from 150 countries and 170000 attendees. Many conceptual products shown in the past have become actual or even mass production products this year. Out of all the products exhibited “VR” related products has been the focus of attention, this can be seen in the 79% increase for related products. Autonomous vehicles & vehicle related technology have also been the focus of this year, with well over 200 thousand Square foot of exhibition space. Allion is here to provide first hand coverage for all you tech fans out there.

This year with more than 10 venues focused on Autonomous vehicles; which is a 42% increase from 2016. One of the main spectacles was on Faraday Future débuting their new FF91 two days prior to the CES event. The FF91 not only has a top cursing speed of 378 miles, but also can accelerate from 0-60 in 2.39 seconds. The FF91 also includes facial recognition and is able to adjust the temperature, seating height, audio and video according to the drivers’ habits. Interestingly there was also a video showcasing an FF91 overtaking the Model S in a drag race.

Faraday Future is also capable of locating vacant parking spaces after the driver has left the vehicle; however, due to the operating environment a demo was not possible.

The FF91 from Faraday Future is now available for pre-order from the website.

Honda has also unveiled a brand new smart car “NeuV”, with the concept of “inner city co-sharing” in mind. The vehicle will automatically steer itself to a passenger who requires a lift when it is vacant. This vehicle also includes the much anticipated HANA（Honda Automated Network Assistant, which is capable of recognizing the drivers facial expressions, sound, mood and emotional state, thus in turn providing suggestions or support towards driver safety. It also has the capability to learn from experience to determine the most optimum route for the driver.

MERCEDES-BENZ has showcased the “Business Oriented” Vision Van; the van includes an automatic rack, lift and even equipment for drones. The energy for the Vision Van comes from 75Wh lithium batteries and has a top cruising speed of 270km. The top has room for 2 drones, which are capable of delivery up to 19 kilometers. The latest estimated launch is 2021.

BMW has also attended CES this year, with their 5 series sedan. Showcasing their own autonomous technology. During automated parking demonstration, we observed the onboard computer communicated with the valet management system to show vacant parking spaces, then when the driver leaves the vehicle the system will direct the vehicle to the available space. After the vehicle has finished parking the BMW cloud system will notify the driver and allow him/her to stream images of the vehicle.

AI system application is not only limited to sedans; Honda has also unhealed the world’s first autonomous motorbike the “Honda Riding Assist”. This technology utilizes the balancing system from Honda’s ASIMO humanoid robot. This fascinating upgrade allows the bike to balance it’s self even if the driver is not on the bike. Besides this the system also balances the bike during tight corners or even if the driver loses balance; hence, greatly reducing the risk involved. Besides this the bike also includes an onboard tracking system to monitor speed and location.

IoV Trends & their Integration For Entertainment

In terms of IOV BMW has also announced “BMW i Inside Future”, this also implies for the future concept for autonomous vehicle cockpit design. The entire vehicle abandons conventional doors for openness, also all four tires are embedded in the vehicle and sealed. Besides the seating the cockpit only includes a steering wheel, panel, LCD display and a levitated “HoloActive Touch” simulation system.

The HoloActive Touch incorporates HUD, hand gestures and holographic imaging technology into a projected image in the center; through this function the driver can operate the system without being disturbed when driving. The system also allows for gestures to be used for operating the onboard entertainment system. This technology embodies the driver to become truly free from the bondage of conventional entertainment systems. A speaker located within the head rest “Personal BMW Sound Curtain” generates a personalized sound barrier and which blocks interference form the surrounding environment.

BMW’s “BMW i Inside Future”& the “HoloActive Touch” hologram

IoV is not only limited to sedans. KYMCO has announced an eye opening new product the “Noodoe”IoV. The Noodoe is separated in to three parts smart panel, watch App and the control button next to the gear throttle to operate the various functions.

Noodoe utilizes Bluetooth® technology to establish a link between the cell phone. Allowing for detailed information to be displayed besides speed, weather, phone messages (missed calls, Line, FB messages, E-mail, etc.); however, for safety reasons these functions would only operate when the vehicle is completely stationary. The Noodoe will start production early this year and be introduced into the Taiwan market before this June.

VR, AR Gains interest with a wide array of applications

This year at CES there was an array of VR products, but out of all the products shown Samsung’s Samsung Gear VR 4D Experiences showed the most potential. Samsung’s custom VR chair allows for a 360 degree virtual view, besides scenic views, it also offers a thrilling roller-coaster experience. The Gear VR has sold over 5 million units already.

The anticipated HTC Vive 2 did not make its debut at CES. However, it did unveil two components for the Vive, “the Vive Tracker” and “Vive Deluxe Audio Strap”. The motion tracker combines with items in the game (spears, weapons, gloves, etc.); hence, no longer relying on joysticks to provide an even more realistic experience.

Asus also displayed the first smartphone worldwide which utilizes both AR and VR technology the “ZenFone AR”. Supporting Tango and Daydream technology, the ZenFone AR would be available in the second quarter this year. Asus performed a live demo of its AR capabilities, via their cooperation with GAP to allow users to simulate their appearance after wearing GAP outfits.

The integration of 5G chipsets into the next generation IoV

As a new generation technology 5G naturally became the focus of CES 2017. Intel announced its 5G Modem which supports 6GHz mmWave, allowing for integration into systems all around the world. This 5G Modem is able to reduce Lag and support large bandwidths; Thus, matching the requirements of 3GPPs’ 5G NR technology.

Intel plans to release products in the later of this year, allowing for developers to test 5G technology.

Sony shocked the industry by releasing their brand new XBR-A1E Bravia 4K OLED; this flagship product is equipped with 8 million OLED pixels and Sonys’ own advanced 4K HDR X1 chip. Not only can it reduce blur, but also produced a wider angle of view and show true black on its display. Sony has also incorporated “Acoustic Surface” technology allowing for sound to come directly from the display panel. 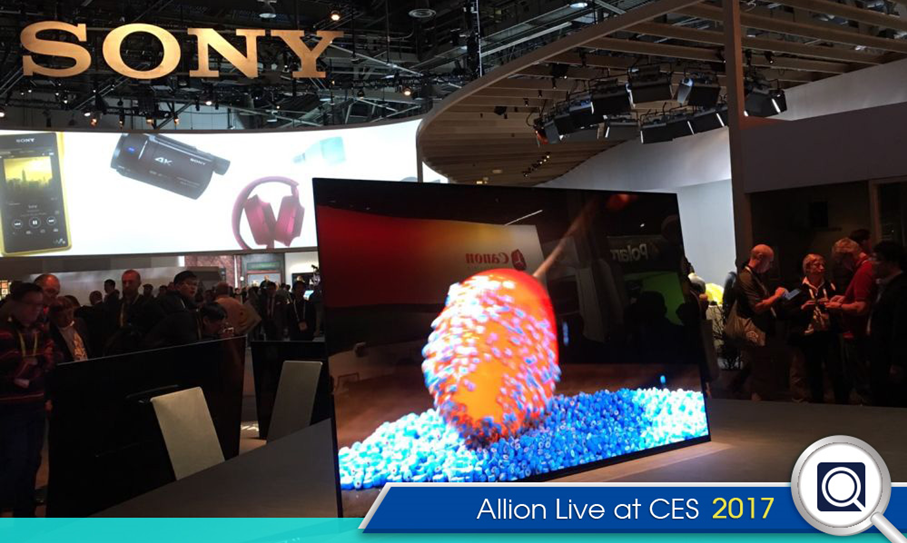 In terms of display standards, the HDMI Forum also published its new HDMI 2.1 spec. HDMI 2.1 supports 8K@60Hz and 4K@120Hz, it also boasts active HDR with a transmission capacity at 48Gbps. It also supports video streaming of uncompressed images including 8K HDR and back supports previous specs. Focusing on Entertainment and includes VRR mode allowing for a better motion flow of the image.

With the rapid development of wireless charging; it has undoubtedly a future standard for tech gadgets. EPC announced its’ GaN wireless charging system, this system allows for interchangeability and compatibility for between different charging standards that are already existent on different devices such as PCs’ and smartphones. There was also a demonstration of a pill sized X-ray system; which allows for the patient to swallow the pill for a Colonoscopy inspection or on autonomous vehicles to strengthen imaging sensibility.

NXP also announced the first wireless solution capable of producing 1000W for computer systems. This system has few working parts and is thinner then 2mm also it is capable of transferring up to 94% of its energy to fit the needs of industrial users. Hopefully in the near future it will be available to average consumers.

The Market for Unmanned Drones is ripe for the taking

With the improvement of Unmanned Drone technology, its’ application has also spread. In this year’s CES PowerVision the producers of Power Egg Showcase a brand new product the “PowerRay”, which has the ability to dive 30 meters below water and use sonar to detect fish via its App for the ideal placement of the sinker and bate.

Naturally this Done also features the ability to mount a 4K camera. It is able to stream live video feeds from a First Person View FPV.

The most noticeable of the Drones was from the Chinese manufacturer EHANG with their Ehang 184. The Ehang 104 can carry up to 100 kg, with a top speed of 100 km/h. Destinations can be set via App for automated flight; however, possibly due to legal issues there was no live manned demo. 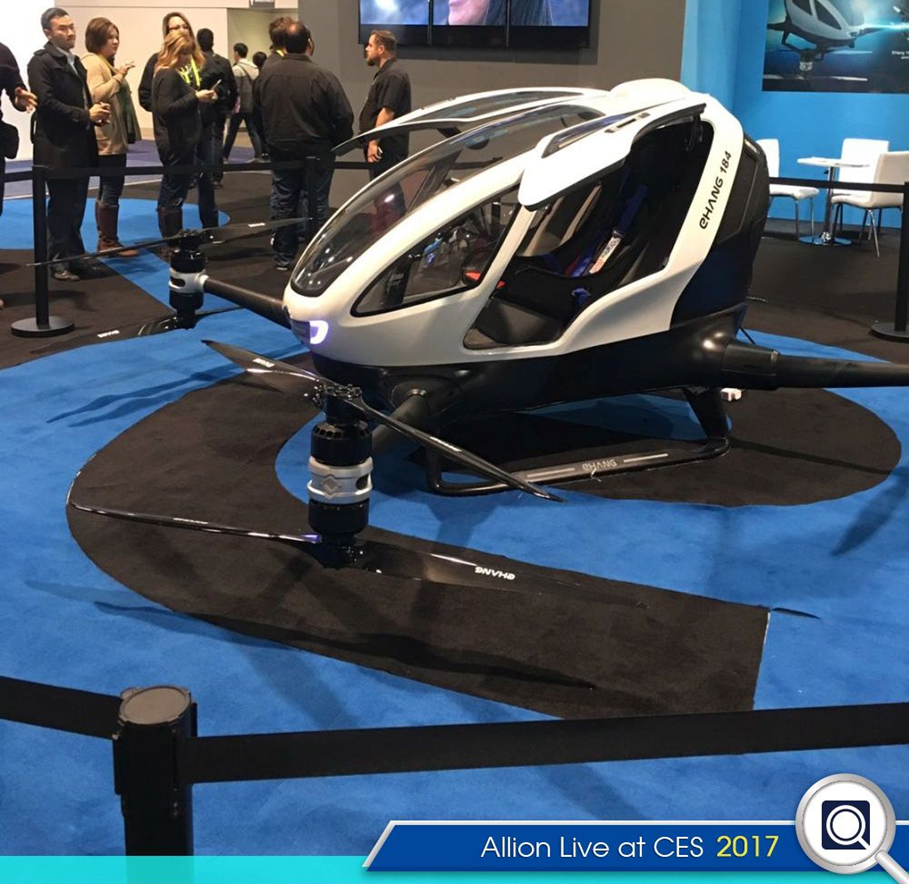 LG announced a new series of robots “Smart Service Ecosystem”; the HUB robot is embedded with Alexa, which was one of the high lights of the show. The system is able to link and operate Hi-Fi, refrigerator, TV, etc. It can also provide weather, News, Traffic updates, etc. Acting as a house keeper the Hub robot can identify members of the family; thus, when you return home it would greet you with different welcoming dialogs.

As a side note, LG also displayed its SIGNATURE series smart electronics, For example the fridge and washing machine is operated via App, and so even if occupants are not at home they may operate and monitor the washer. The fridge is equipped with a sensor enabling is to recognize taps on the surface, making the door clear to display the contents. 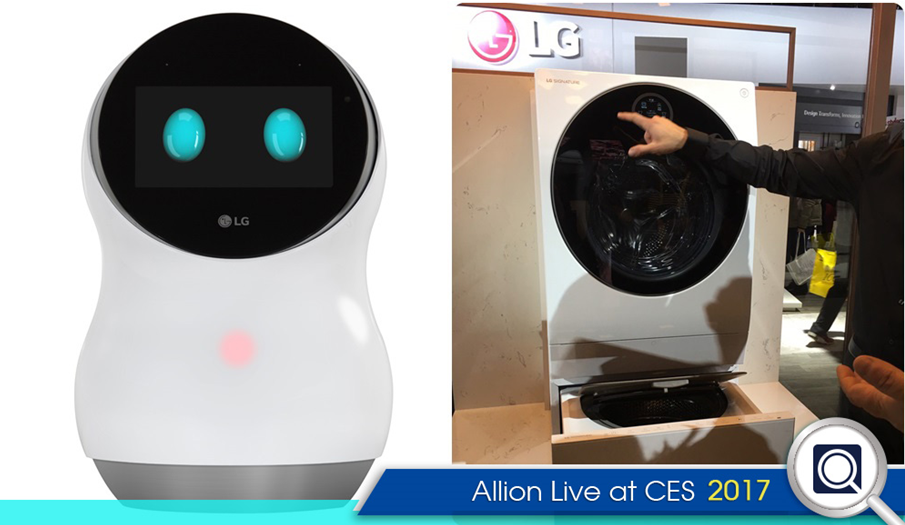 Hub Robot (left) is able to receive voice signals, the SIGNATURE series (right), is operated via APP and is capable of remote operation.

Sony also displayed their concept robot the Xperia Agent. It combines sound control, projection and music function. The Robot also offers the Eye ( a surveillance system ), which operates as an assistant for the office or home. Using cell phone paring it is able to sink via Google Now and can receive reminders, weather and even the latest sporting update.

Xperia Agent is small and cute drawing attention from the crowd.

At CES 2017 we saw many conceptual products in the past become mature and consumer ready products. Allions’ Global Marketing Strategy VP Anne Tsou states “ this year we have seen the maturing of the smart car & IoV market, at the same time potential opportunities have also coagulated; also there were many IvI entertainment systems on display. Hence, meaning a new demand for in vehicle entertainment.

Another point to mention would be unmanned drones has entered the market. As Anne Tsou points out “in the past drones were more of a concept and mainly used as an eye catching display item; however this year with the improvement of technology, manufactures have put emphasis and attention to carve out their own market positioning and placement. Making this year an exciting new year for drone products”