With the advancement and wide adoption of Smart Home technology, the status of the Router (AP) as the nerve center for the entire operation has become ever more paramount. Hence, as far as WiFi is concerned, it could be seen as the equilibrium in the purview of one’s home. If connectivity and performance are your key concerns then you should be concerned with your choice of wireless AP’s. With the gargantuan scope of choices from brand, price, aesthetics to the array of platforms from Apple’s Home Kit, MI, etc. All of which offers various functions and applications; however, most of us only require a multifunction internet control center and would do quite well with it. Thus, embodying us with the ability to control the majority of household products and the ability to becoming more energy-efficient, convenient and safe. Overall uplifting the quality and standard of living for all families.

As a professional third party testing and certification Lab Allion is able to provide an unbiased view on any products we test. We start by simulating an environment with and without outside interference at the same time providing testing criteria’s such as functionality, resistance to signal obstruction and data exchange capability, and so forth. In the following we shall test 3 consumer AP products (represented as AP 1, AP 2, AP 3), which will undergo numerous WiFi performance tests (below is the AP order and not the test results)

We shall use a real world scenario to ensure test reliability; simultaneously we would approach the test via wireless modes, direction. Therefore, not only providing performance data comparisons, but also at the same time performance in different wave lengths, locational data transfer capability, and resistance to interference in different situations. 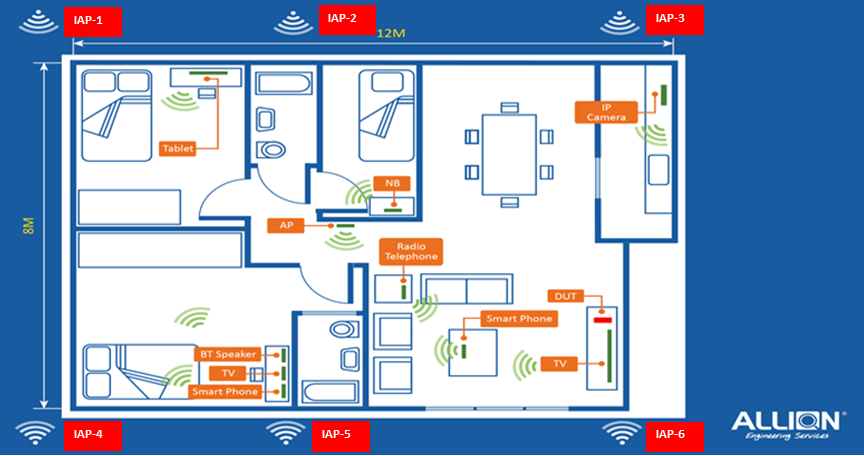 With the increase of interactive mobile devices, WiFi usage for data exchange, video storage has become the norm. Allowing mobile devices to transfer data quickly & safely has been the focus and  goal for all Smart Home mobile device providers (for example: smart phones, routers, projectors). How will these 3 AP products fair in the following tests?

From the results below, it is evident from the data transfer rate for 2.4GHz band (without exterior interference) has better performance on AP 2 compared with the other 2 AP’s (lower left). AP 2 utilizing channel 1 has maximum transfer rate and AP 2 also has maximum transfer rate when device is located in the upper left corner room using band 6. However, 2.4GHz under exterior interference would have a different result, with AP 1 able to resist interference better than the other 2 AP’s, but when located in the upper left corner room the data transfer decay rate is obviously more than others. Overall when all three AP’s were located in the upper left corner room, the performance on band 1 was poorest; however, AP 2 performed better on band 6 & 11.

From the upper right picture, we could observe when outside interference is involved, AP3 has better resistance capability; however, when AP3 is located further away in the children’s room it’s Receive capability is obviously much lower than the other 2 devices. The Receive figures for the children’s room have also notably been obstructed, causing transition capabilities to be obstructed. Overall AP 2 has much better results on countering interference than the other devices.

Regardless of the circumstances, to the selection of the three AP, AP 2 of the actual transmission capacity than the other two excellent. However, in the case of external interference with 2.4GHz, AP1 resistance capability was relatively good. In the case of external interference at 5GHz, the short-range AP 3 has better resistance capability, but it is worse than the other two at longer distances, which may be due to the difference between the antenna and the field design.

In general, we will consider the selection of medium band as the test requirement, but for the test, the results of medium bands does not necessarily represent the performance in high and low bands. In terms of test completeness, it is recommended that high, medium and low bands be covered in the test conditions. When the Transmit transmission value is too low, in addition to affecting the quality of the Internet will also affect the quality of network video playback. When the Receive transmission value is too low, the wireless device may be disconnected or the transmission may be interrupted. As the test in the children’s room general results ​​were poor, products which are considering consumer performance for the product may look forward to fulfilling this gap. In summary, when the AP home users are in the choice of wireless router products, naturally products aspects with good hardware configurations and great coverage would be considered at the same level.

Post Views: 834
Technical
Latest technical blog
This site uses cookies. By continuing to browse the site you are agreeing to our use of cookies. OkFind out more here