Since the need of thin and light laptops such as Ultrabooks, Ultrathin Notebooks and portable devices has been growing, Solid State Drive (SSD) has become the mainstream storage media for tablets, and also the standard storage alternative for high-level notebooks, as a replacement for Hard Disk Drive. The great amount of implementation hence increases SSD’s annual growth rate as a whole. With the prevailing trend of thin and light design and the decent of SSD’s unit price, consumers have shown higher interests in SSD than before. IHS iSuppli even predicts that there would be more than 227 million shipment volume of SSD in 2017.

As a global validation expert, Allion Labs, Inc. (Allion) is deeply concerned about the development and market trend of SSD. In order to verify the actual performance of SSD, recently we select 11 different SSDs from well-known brands in the marketplace to execute an experimental test. This test utilizes various test tools focusing on performance and power consumption. Each test tool contains multiple test items. Besides pure performance evaluation, some of the test items are also aimed at stimulating SSD’s performance with pre-defined workloads. Moreover, Allion analyzes the raw data resulting from each test, revealing both overall and particular performance results of each SSD from our objective perspective and providing references to customers and vendors. This analysis is considered to be helpful for venders and consumers when making purchase decision or developing new products, and further to understand the common advantages and disadvantages of SSDs on the market possess over.

In this test, these 11 SSDs are all products bought during the 3rd quarter of 2012 to the 2nd quarter of 2013 and the interface is mSATA(SATA3.0). Three of them are indicated that they have 120GB capacity and the rest of them are 128GB. We arrange each SSD product alphabetically from A to K. As in Chart 1, it shows each product’s capacity size and nationality. 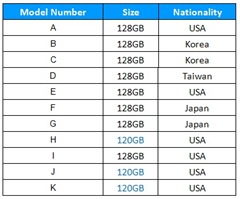 In this test experiment, we use the same computer with Windows 7 x64 SP1 for all tests.

The performance benchmark test tools we adopt this time all include several test items. After every trial, there would be a score on the monitor generated automatically for each SSD. Higher value represents that is has better performance score in this test item. After acquiring scores of all SSDs, we arrange the rankings of them in accordance with its scores; the one behaves the best is scored 11 and the worst is scored 1. Smaller number means it has higher ranking. Conversely, in power consumption test, if the score number is bigger, it means this SSD’s consumption is worse. Then we add up all the scores from each test items to have Overall Rank for performance benchmark test tools. As for the raw data from power consumption test, higher the number is more power consumption it takes which means its rank is lower. So if the raw data score figure is lower, it is more power-saving.

Focusing on the characteristics and validation focal points of SSD, Allion builds and develops our own Allion Benchmark Test to validate the SSD’s actual performance. The major feature is that it can simulate real user scenarios via different pre-designed workloads to do the performance benchmark test. In this case, we choose 7 different types of Read/Write scenarios in Allion Benchmark Test under Windows 7 x64 SP1 environment. In order to be objective and fair, these 11 SSDs all have be executed for 5-run tests and the results would be averaged to have the raw data for scores for each test items. After summing up all the results, we have the overall Rank for Allion Benchmark Test in the end. In this test, SSD G has the best performance, and SSD A and I are the worst.

In Allion Benchmark Test, we simulate several user scenarios for test, such as “Windows Boot”, “Gaming”, “BitTorrent” and “Extract/Compress File”. After switching Chart 2 to bar chart, as in Chart 3, it is clear to compare different Read/Write speed among these 11 SSDs. Generally speaking, drive G has the best performance, but not in every test items. For example, drive G loses to drive C and F in Windows Boot test item, but outshines every other SSD in Gaming Read and Extract/Compress File Write test item, and ranks the second in BitTorrent Read. As for drive I, it works the slowest in 6 test items out of 7.

By all accounts, if we compare the raw data of these 11 SSDs with themselves, it is obvious that they have better performance in some specific test items such as Windows Boot, Gaming Read and BitTorrent Read. It is because that theoretically, the speed of accessing big data is faster than small data when SSD is processing files. As for Extract/Compress File test item, since Random Write takes most parts of its workload, every SSD’s throughput performance is worse than other test items.

Unlike traditional drive, SSD is highlighted by its compelling efficiency and high speed transmission. In order to differ from those ubiquitous test plans for speed test of various data sizes, Allion especially develops our own customized testing program. The program is based on mass-collected database of user behaviors information and is aimed to tally with the actual realities of workload and conduct simulated test for SSD i n different user scenarios. In addition to those simulated tests as mentioned above, Allion is able to provide other test items such as Media Playback, Internet Browsing, Antivirus Software, File Copy/Delete and System Backup/Recovery, and more, assisting companies in understanding the performance of SSD in various missions thoroughly and giving an extra hand during product design and development stage. 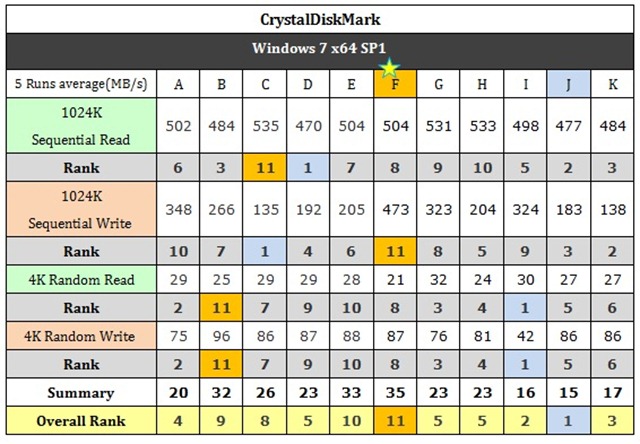 According to chart 4, drive F has the best performance and drive J is the worst.

In chart 5, on the average, the 1024K Sequential Read/Write speed is clearly faster than 4K Random Read/Write speed, which is four-time faster. Generally speaking, the Reading speed is faster than the Writing speed for storage media. We discover that even though drive F has very close speed performance in both Read/Write of 1024K data and is the fastest one in Overall Rank, it doesn’t perform well when processing small-size data. Therefore, if developers want to optimize drive F, they should enhance its Read/Write ability on small-sized data.

Meanwhile, we observe that these 11 SSDs have close speed performance in 1024K Sequential Read, the gap between the slowest drive D’s 470 MB/s and the fastest drive C’s 535 MB/s is not large. But the speed of Sequential Write drops from drives F’s 473 MB/s to drive C’s 135 MB/s; which the speed of drive F is 3.5 times faster than drive C. Among all products, we notice that drive C has the fastest speed in 1024K Sequential Read(up to 535 MB/s), but its speed of 1024K Sequential Write is the slowest(only 135 MB/s), which is almost 4 times slower than its own Sequential Read speed. Such a huge difference indicates the instability of the product itself, which is the main part that developers should take into consideration during SSD design and development stage.

Via Chart 6, it is clear that SSD I is much slower than the rest of the drives in 4K Random Read/Write. This also means if we want to improve the reliability of drive I; we should focus more on the Read/Write process of controller chip.

Since SSD adopts NAND Flash as storage media without the need of rotating disk and motor while HDD uses, SSD is shockproof and famous for power saving. As a result, Allion not only focuses on performance test but also power consumption test. We choose two tools this time to test these 11 SSDs. Thereinafter we would introduce and analyze the performance of Maximum Start Watt, Watt Consumption in Different Data and Power Consumption in Different Status with our special-customized testing tool “Allion Power Consumption Test”. 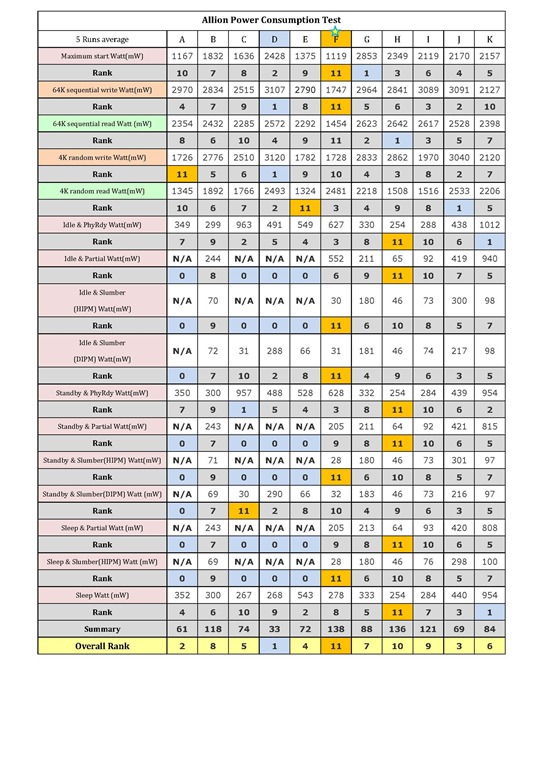 There are 16 test items divided in Allion Power Consumption Test, including SSD Maximum Start Watt of instantaneous electrical power, 64K Sequential Read/Write Watt, 4K Random Read/Write Watt and different Watt of Idle, Slumber and Sleep. During the test execution, we will measure the power consumption under different power states. But some products such as drive A, C, D and E do not support certain test items, so we cannot get the test results. In general, drive F has the best performance and drive D is the worst in Allion Power Consumption Test.

In order to build an easier and friendly user experience for novel technology, more and more ultra-thin notebook adopts SSD as a new generation storage media. For portable devices like notebooks or tablets, the longer the standby time is means more convenient it is for consumers. Although SSD is able to provide high performance efficiency, power saving ability also does greater influence to user experience. As in Chart 8, the first test item of Allion Power Consumption Test is Maximum Start Watt and drive F is the best one with only 1119mW consumption and drive A with 1167mW consumption takes second place; drive D with 2428mW consumption and drive G with 2853mW consumption are the worst two SSDs of this test. According to the bar chart, drive G consumes 2.5 times of power than drive F, which represents that it still has room for improvement on power saving part. Meanwhile companies are trying to maintain SSD’s power consumption stability, it is necessary to take the design of power saving implementation into consideration to satisfy the need of mobility.

From the angle of testing power consumption of different data size (as in Chart 9 and Chart 10), in general, SSDs consume more power when processing big data than small data. 64K Sequential Read/Write Watt are respectively 2381mW and 2734mW, and 4K Random Read/Write (mW) are 1934mW and 2406mW, which strongly proves how interior design of SSD controller affects SSD’s power consumption when processing different sizes of data and these are all details that developers should take into account. Even though SSD highlights its high speed and low power consumption, there is still room for improvement; no matter interface, controller chip or the design of NAND Flash, every single details would affect the integrated performance.

To sum up these two tests mentioned above, Allion, as a professional laboratory, analyzes that nowadays more and more companies are able to optimize SSD’s performance speed while keep low power consumption, such as drive F. Although this time we only focus on these two topics for test, there are a lot of critical evaluation points such as performance decline, endurance, reliability and interoperability and more that cannot be ignored when designing a SSD. Especially after being used for a period of time and with the gaining of Read/Write cycling times, SSD may have smaller available storage space and encounter challenges and risks. Therefore, we suggest relative vendors should take multi-angle and customized test plan to validate your products. We believe that only with superior quality will the product conquer the market.

Post Views: 1,824
Technical
Latest technical blog
This site uses cookies. By continuing to browse the site you are agreeing to our use of cookies. OkFind out more here