According to iSuppli, the price of NAND Flash would continue to drop in 2014. The price of Solid State Drive (SSD) that uses semi conductor such as NAND Flash as data storage device would gradually become friendlier which would improve consumer’s purchase intention and accelerate the speed of penetration rate. Ultrathin design of SSD is not only used on consumer products, but also massively adopted on enterprise level products. At the same time, there are some products between consumer and enterprise level.

In order to know the differences between consumer and enterprise products, Allion chooses 6 SSDs: drive Ato drive E including entry level products and high level eSSD and cSSD are from a same company, and driveF from another famous company. In this report, we would test these 6 SSDs and analyze their hardware components and performances. A further analysis would reveal the development key point of products from a same brand aiming at different target markets and would also help manufacturers know the performance of each DUT to assist them with designing new products.

Basic Information of the 6 DUTs: 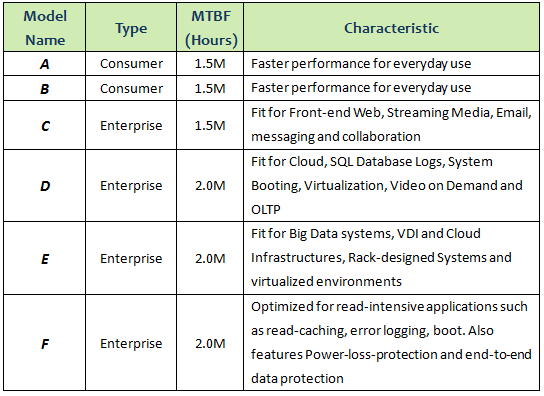 In this test, we would focus on two aspects as below for further analysis:

SSD is famous for high efficiency, low power consumption, high endurance and small size. Even SSDs from a same company, there are some differences in hardware design. For various target customers, there are some different components that may impact on SSD’s performance and stability. Allion’s senior expert team would disassemble every SSD, survey interior structure and components such as controller, PMIC, NAND Flash and poly-tantalum capacitor of each product, and give some insightful advice. 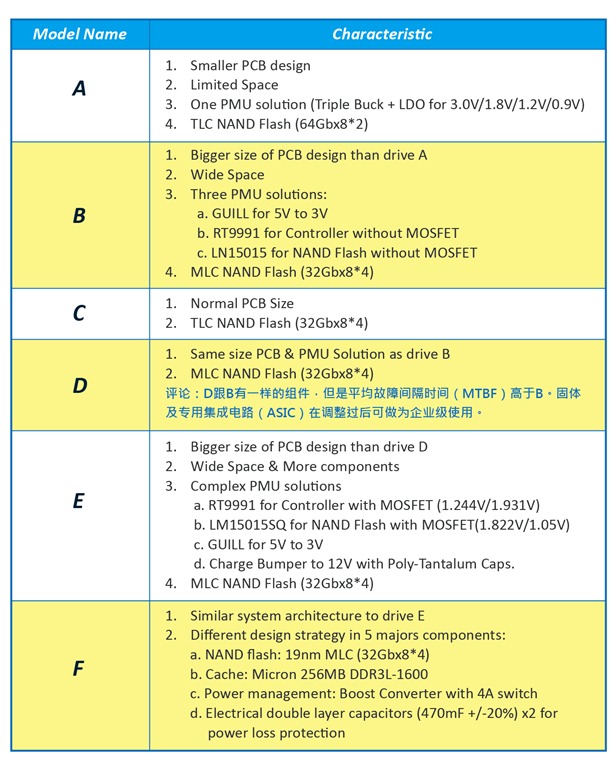 n Chart 2, it simply lists the components of the 6 drives.

The data scale that Enterprises process is much bigger than the one that common consumers do, so we choose this test tool to simulate the enterprise server application workloads to measure the corresponding I/O for target drives.

According to JEDEC, the 4K block size is most frequent-used data payload for enterprise SSDs. This sustained test adopts IOmeter to generate QD 32 Random Write workload for target drives. All DUTs would be tested for consecutive 24 hours.

In Pic 6, every drive maintains very high IOPS in the beginning of 24 Hours Sustained Test and drops to low stable states for the rest 22 hours.

This graphic above shows the degradation situation for all drives in the first 30 minutes. We can find out that drive A and drive C drop faster and lower. Besides, drive F has less degradation under long-term random write pressure test, showing that it serves as a reliable and stable product for enterprise environment.

We set the plus and minus 10% of the average value of every DUT’s own raw data as standard range for performance stability criteria. If a DUT has more than 95% Read/Write performance data out of its own standard range, it would be warned as an unstable drive. Chart 5 shows that drive F has the best stability performance, although it is a little unstable on 4K Random Write test item. Drive A has the worst performance. Besides, even though drive E’s price is more expensive than drive D’s, drive E doesn’t have relatively stable performance, because it has stability issue on big data read/write. 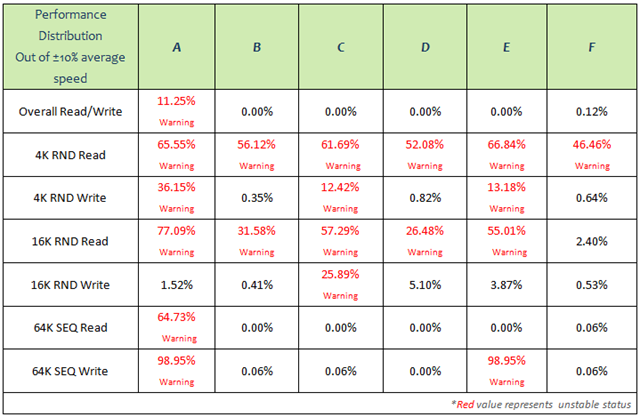 Generally, that top 10% performance average and bottom 10% average gap over overall mean should be less than 20% of mean. It not, then this drive has potential risk. In Chart 6, drive F only has high level disparity performance behavior in 4K Random Read test item but has the overall best stability performance which lives up to enterprise’s demand. On the other hands, drive A and drive E have high level disparity performance behaviors during 10TB data access. The technology of SDD has come a long way, but manufacturers still have a lot to do on maintaining the stability of products.

To evaluate all DUTs on long stress environment with different conditions, VDBench will be used to simulate DUT’s performance when processing 0.5K, 4K, 16K and 64K files. The workload is based on JEDEC’s definition: 40% Random Read and 60% Random Write. All DUTs would be tested for 50 hours and would be evaluated according to their IOPS. In Pic 8, drive F has an IOPS average of more than 100, outshining all other DUTs.

If we switch Random Read to 70% and Random Write to 30%, drive F’s IOPS still remains the highest which indicates that drive F has high-level capability of maintaining high efficiency no matter processing Random Read or Write. In Pic 9, drive C’s performance drops in the 8th to 16th hour.

MySQL has been used for test tool for many years since its biggest advantages are high efficiency and high reliability. We use this tool to simulate a middle-size enterprise (nearly 200 users) database environment for target drives and generate the MySQL workload for performance evaluation. There would be 40 Tables with 10,000,000 rows each (106 GB of data) working at the same time. We would evaluate the performance of DUTs under different buffer pool size settings and multiple threads.

When OLTP throughput’s buffer pool size is lower than 15GB and thread is 64, as in Pic 10, drive F’s average OLTP throughput is 2820.63, which is the best DUT. In Pic 10, each dot in the graphic indicates each throughput during testing; the more dispersed the situation is means the more performance inconsistence issues happen. For example, drive A and drive C have this problem. To sum up, drive F not only wins in this test but also qualifies itself for serving the post of middle-size enterprise database. 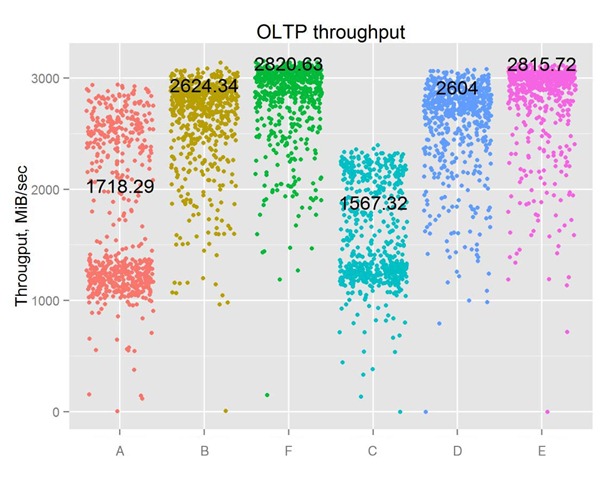 Chart 7: Competitive Analysis of All DUTs

Drive F has excellent performance under most of enterprise testing; its hardware component is also designed with very high standard. However, drive F’s high price may intimidate small- and medium-sized enterprises since not all companies need SSDs with excellent performance. We also find out that from drive A to drive E, their hardware components are not that different between each other. But their price segmentation strategy makes this brand conquer the market share. Therefore, if company of drive F adopts this strategy and develop different SSDs for enterprises of different scale, it will gain more competitiveness.

We are looking forward to seeing the price of SSD becoming more acceptable to the public. It is predictable that no matter consumer or enterprise products, there will be a fierce competition. Although this test report focuses on performance degradation, endurance and stability, we would like to recommend companies to adopt multi-angle test solution to evaluate your and your competitors’ products. For more information please visit www.allion.com/strorage.html

Post Views: 2,471
Technical
Latest technical blog
This site uses cookies. By continuing to browse the site you are agreeing to our use of cookies. OkFind out more here