Virtual Reality (VR) is trending in 2016, with multiple VR systems launching this year. Although VR applications may expand in the future, for now, the focus is primarily on VR gaming. As a result, it seems like prime time to examine the state of VR gaming systems, but rather than leading with hardware specs or market research, we begin the article on a lighter note with some popular VR games.

VR games are the quintessential VR experience since they combine audio-visual storytelling with player interaction in immersive 3D environments. There are currently hundreds of VR games at various stages of development, from concept to launch. These include AAA titles from big name studios, as well as, smaller indie titles. Here we introduce three highly anticipated VR games that are winning hearts and minds in the gaming community.

EVE: Valkyrie features intense team-based combat in beautifully rendered 3D-environments with rich surround sound. This spaceflight FPS is getting rave reviews and comes bundled with the soon-to-be released Oculus Rift. It will also be released on Sony’s PlayStation VR system at some point in the future. 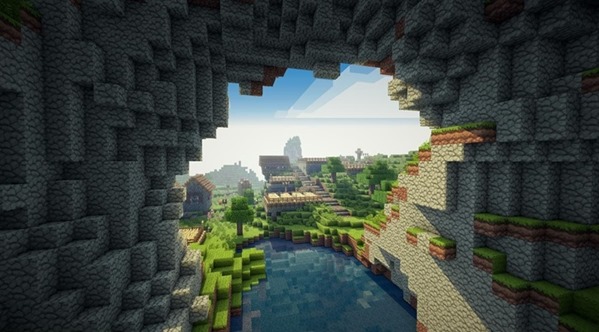 This sandbox crafting franchise is a block-based world of its own. You would need to have been living in a dimly lit cave to have not heard about this pop-culture phenomenon. With over 70 million copies sold worldwide, Minecraft is a runaway hit that is certain to draw many hardcore fans into VR gaming. Minecraft will launch soon on both the Samsung VR Gear and Oculus Rift.

This job simulation from the future is a multi-award-winning slapstick-comedy VR game. In a world where robots have replaced all human jobs, players can step into the "Job Simulator" to learn what it was like ‘to job’. Relive the glory days of work by simulating glamorous jobs, like gourmet chef, office worker, or convenience store clerk. This offbeat gem is an official launch title for the three major VR systems being released this year (HTC Vive, Oculus Rift, and PlayStation VR).

As you can see, VR gaming covers a variety of genres, including action, adventure, and simulation. However, the real novelty of VR gaming is not in the games, but rather in the change in perspective moving from traditional 2D to fully immersive 3D environments. VR gaming is more engaging because it inserts players directly into the action via advanced motion sensors and game controllers. This fusion of seamless 3D environments with motion detection is fundamental to successful VR experiences. With three major VR systems launching in 2016, these experiences are more accessible than ever before.

2016 is the year that commercial VR systems go live, but it may be a while before they go mainstream. The first challenge for the industry is to prove that VR experiences are worth the hardware investment. So far, early adopters and journalists seem to be buying into the marketing hype surrounding VR gaming. The real test will come when hardcore gamers actually get their hands on these new VR systems.

At present, the leading VR systems are expensive peripheral devices that must be plugged into powerful personal computers or game consoles. For instance, according to NVIDIA [1], “immersive VR experiences require 7x the performance of a typical 1080p PC gaming experience”, as shown in the figure below. 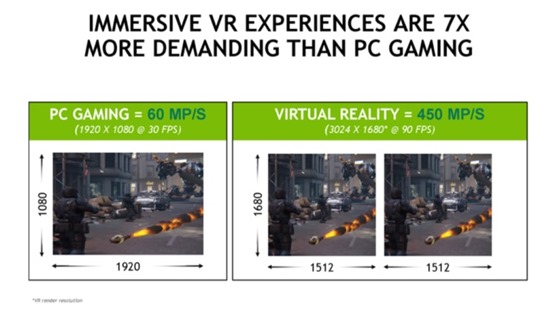 These rigid hardware requirements limit the reach of VR systems to hardcore gamers, since most casual gamers do not have access to sufficient computing power. According to one article [2], only 13 million PCs and 36 million PS4 consoles are even able to run optimized VR experiences. This represents a combined market potential of 50 million VR host platforms.

Despite these limitations, if VR systems work as advertised, without major performance issues or negative health effects, then they are likely to increase in popularity. As VR technology develops, the user experience is bound to improve and prices will drop through economies of scale. Perhaps eventually, VR systems may overtake traditional 2D displays for desktop and mobile devices. If that happens, it may disrupt multiple industries and might even change how we all interact with the world.

As promised, here are the details for the three major VR systems launching in 2016.

The Oculus Rift started as a Kickstarter campaign that raised almost US$2.5 million in crowdfunding.Facebook later bought the parent company (Oculus VR) for US$2 billion. Over the years, several prototypes have been built, including two that were made available for purchase as ‘development kits’. These development kits, DK1 (2012) and DK2 (2014) were meant for developers, but many were also purchased by VR enthusiasts. The first consumer version of the Oculus Rift started shipping at the end of March 2016. With a purchase price of US$600, the system includes a headset display, motion sensor, and a game controller. Product photos, hardware specifications, and the official website are provided below.

The HTC Vive is a joint project of HTC, a mobile device manufacturer, and Valve, a videogame developer/distributor. It was unveiled to the public at Mobile World Congress in March 2015. The hardware specifications are similar to the Oculus Rift, with identical display resolution and refresh rates. What sets the HTC Vive apart is that it is designed for movement, with room-scale tracking (12 m2) and an external camera to detect obstacles. The HTC Vive is scheduled for consumer release on April 5, 2016. With a purchase price of US$800, the system includes a headset display, motion sensors, and two game controllers. See product photos, hardware specifications, and the official website below. 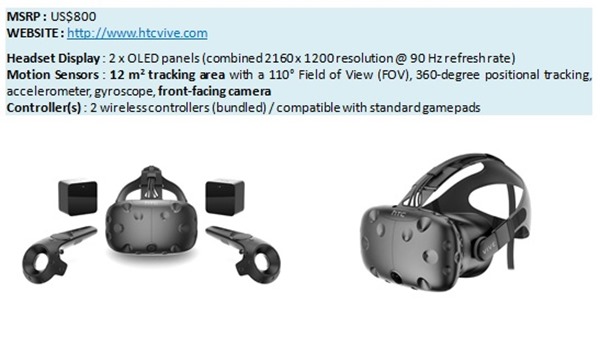 This VR system is designed exclusively for the Sony PlayStation 4 video game console. First announced as Project Morpheus at the 2014 Game Developers Conference, it was expected to release in the first half of 2016, but the launch date was recently pushed back to October. Unlike the Oculus Rift and HTC Vive, the PlayStation VR has only a single 1080p OLED display, but the screen refresh rate is higher at 120 Hz. The launch bundle costs US$500 and includes a headset display, motion sensor, and two controllers. Product photos, hardware specifications, and the official website are provided below.

Sony’s PlayStation VR system (PS VR) looks to be in the best position to introduce VR gaming to the masses with a base price of just US$400. This is much less than the Oculus Rift (US$600) and exactly half the price of the HTC Vive (US$800). The PS VR also has greater sales potential in the near term, as there are about three times (3x) as many PS4 gaming consoles (36 million) as VR-capable PCs (13 million).[2] Also, an entire PS VR gaming system, including the PS4 console, will retail in the fall for about US$800.[3]

Although the HTC Vive and Oculus Rift seem to offer superior VR experiences, both are high-resolution dual-display headsets, they are fighting over a much smaller PC-based market. The only advantage these two systems have is time, in that they are available now, whereas the PS VR will not be available for another six months. If they can establish solid beachheads prior to the invasion of the PS VR in October 2016, they should be able to survive. If VR becomes more popular, the market advantage might switch to PC-based VR systems, since PC hardware constantly improves, while game consoles tend to lag behind.

Game developers are increasingly working on virtual reality games, as shown in a recent survey by the Game Developers Conference (GDC). This survey is probably the best window into the future of the virtual reality market, since the gaming industry is actively developing VR games. Between 2015 and 2016, the percentage of game developers working on VR titles more than doubled from 7% to 16%. As one gaming industry insider put it, “This year, VR is the thing that more developers want to do … It hasn’t taken over, but it has grown fast”. [4]

According to the 2016 GDC State of the Industry Report, 75% of survey respondents agree that VR is a long-term sustainable business. In addition, game developers are increasingly looking at VR tech, with 42% expressing interest in 2016, versus 37% in 2014. Despite the growing interest, most survey respondents do not expect VR systems to match the popularity of traditional gaming consoles in the near future. For instance, only 11% of those surveyed expect VR device adoption to match the current install-base of game consoles (about 40% of U.S. households) by 2020; and most respondents (62%) do not even expect VR systems to reach more than 10% of U.S. households by 2020.

VR game development is growing quickly, and yet, paradoxically, gaming insiders expect only slow growth in VR device shipments for the foreseeable future. The gaming industry seems to be hedging its bets by actively developing VR games, while simultaneously taking a conservative stance regarding future growth prospects. This seems rational, since it is impossible to predict the trajectory of the VR market; so much depends on how consumers react to this first-generation of commercial VR hardware.

According to the 2016 GDC State of the Industry Report, as of early 2016, more developers were working on game content for the Oculus Rift (19%) than any other platform. The next two most popular VR platforms were the Samsung Gear VR (8%) and Google Cardboard (7%). The HTC Vive and PS VR were tied for fourth with 6% of developers working on games for these platforms. These survey results are shown in the figure below. 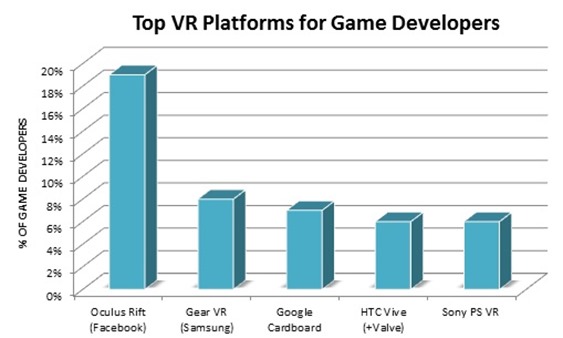 These survey results beg the question: If the Sony PS VR platform is really in a superior market position, why are most developers working on Oculus Rift games instead? It may have something to do with the timing of the survey, just prior to the launch of the Oculus Rift, but if timing were the only factor then the HTC Vive should have scored high as well. It seems more likely that these results reflect sustained efforts by Oculus VR to reach out to the gaming community over the past four years. Oculus VR may have won over game developers, simply because it delivered, “the most developer kits in the market”.[4]

For game developers, VR opens up whole new worlds of player interaction and exploration. Some commentators even talk about VR as a new media paradigm that might have an impact on our civilization equivalent to the introduction of television in the twentieth-century. Only time will tell, but it if happens, then VR gaming will be the driving force that pushes this technology into these new frontiers.

This concludes our introduction to VR gaming. If you have any questions or comments, please leave them below. To find out more about Allion Labs, read our company introduction below, visit our website –www.allion.com, or contact us by email at service@allion.com.

Founded in 1991, Allion Labs Inc. (Allion) has more than 20 years of experience in the product testing industry. Our success is built on putting our customers first, executing projects with professional diligence, and offering the most comprehensive services possible, while also maintaining ethical business practices throughout. By following this business strategy, Allion has become a trusted gatekeeper in the consumer electronics industry. As technology advances, Allion help its partners to stay ahead of the competition by shortening time-to-market, raising product quality levels, and improving user experiences. In recent years, we have increasingly emphasized the importance of interoperability testing and competitive analysis as invaluable product development tools that enable companies to compete effectively in global markets.

[3] “Sony PlayStation VR Will Cost $399 When It Arrives in October”. NYTimes.com