Wi-Fi technologies have brought forth the age of digital homes, which often contain smart TVs, smartphones, tablets, laptops, set-top boxes, smart speakers, smart home appliances, and IoT devices. It is quite common to set up a wireless router in the living room of an apartment or a standalone building. However, the Wi-Fi connection might drop significantly when a user moves away from the living room to enter the kitchen or go back to his bedroom on the second floor. By connecting to the Wi-Fi downstairs, the user will probably struggle with poor Wi-Fi signals or dead spots. A single wireless router can hardly meet the increasing demand for coverage and speed in most households. This is where mesh routers come in to provide every corner of a house with adequate Wi-Fi coverage. 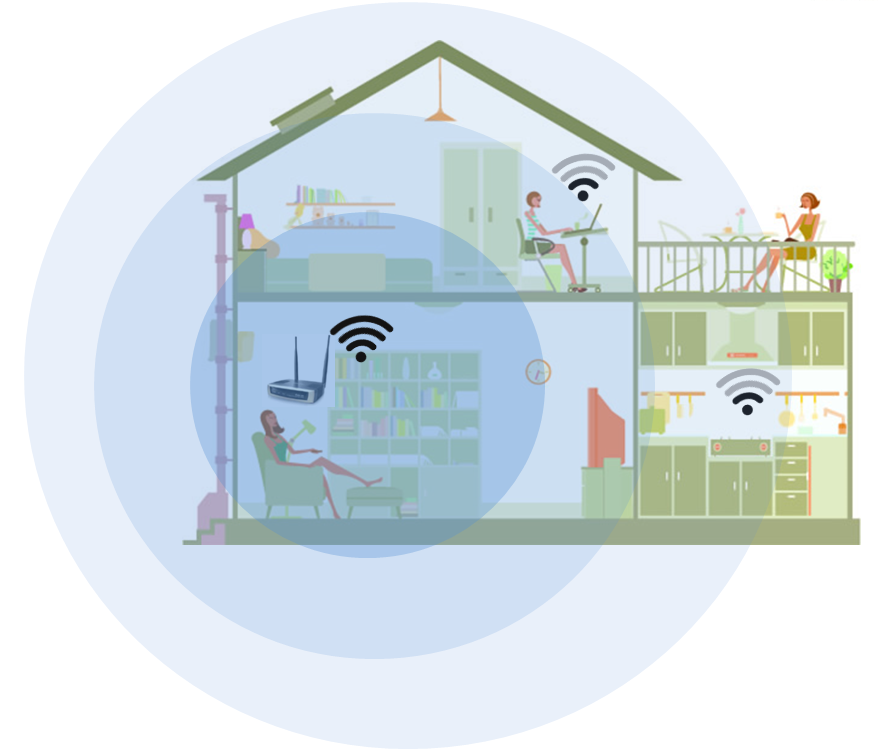 Many manufacturers on the market have launched mesh Wi-Fi systems to extend Wi-Fi coverage in home networks. Most mesh Wi-Fi network systems today use a tri-band design, which is an independent wireless channel to communicate with other access points to ensure that network bandwidth is not decreased by half while enhancing excellent bandwidth performance. In this article, we are going to benchmark 3 sets of commercially available Wi-Fi mesh APs and provide analysis on variables affecting their performance. Specifications are shown in the chart below.

Generally, a mesh network can use either the pyramid or daisy-chain form. For Pyramid types, there are more than two sub-devices connected in series under a single AP. The daisy-chain type features a series of connections, in which each device is connected all the way through. More complicated mesh networks are derived from these two forms. 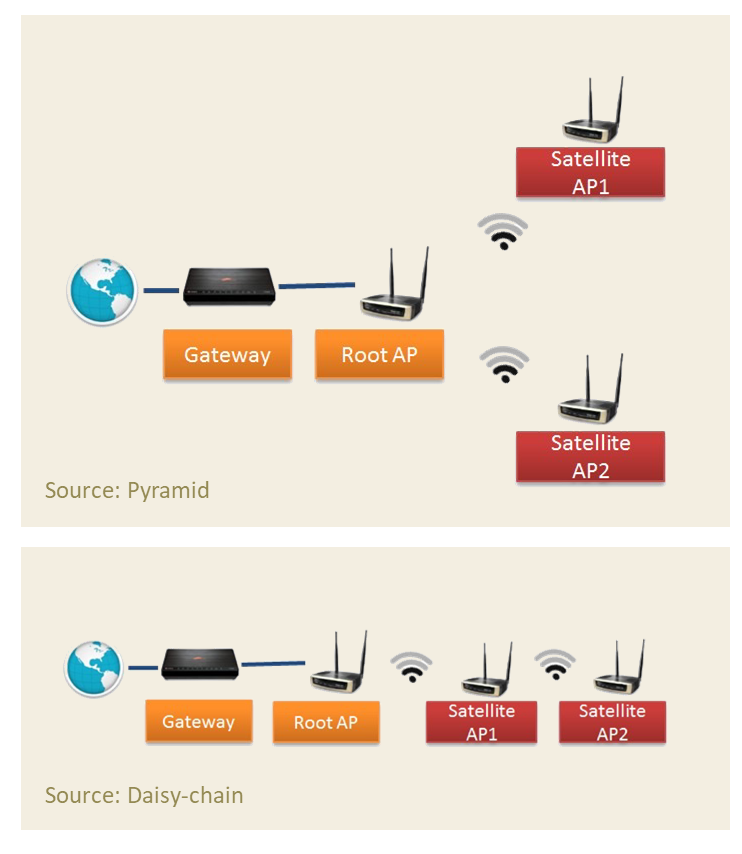 When a mesh network is deployed, there will be objects like walls, partitions, and furniture sitting in between the access points and blocking wireless signals in the real environment to weaken the signal strength. In addition, there are interferences surrounding us like microwaves, cordless phones, or wireless signals in the neighborhood. All these factors are variables in the measurement of a wireless testing and could result in totally different results if not well controlled. To evaluate the performance of a mesh network in the home environment, a real setup based on the layout of the test space and users application is required and we also need to accommodate the mesh connection types (i.e. pyramid or daisy-chain) for proper allocations of the access points.

Figure 3. Objects and their attenuation to wireless signal strength

In this case of benchmark between mesh network systems, we choose the Daisy-Chain mesh network whereas Satellite AP2 will be the gateway to clients and connect to the internet through the backhaul from Satellite AP2 to Satellite AP1 and Root AP. To stress the mesh network to their limits, we setup this entire test in a relatively harsh approach in the 30 x 20 meters distance open space with little interference. (see Figure 4) 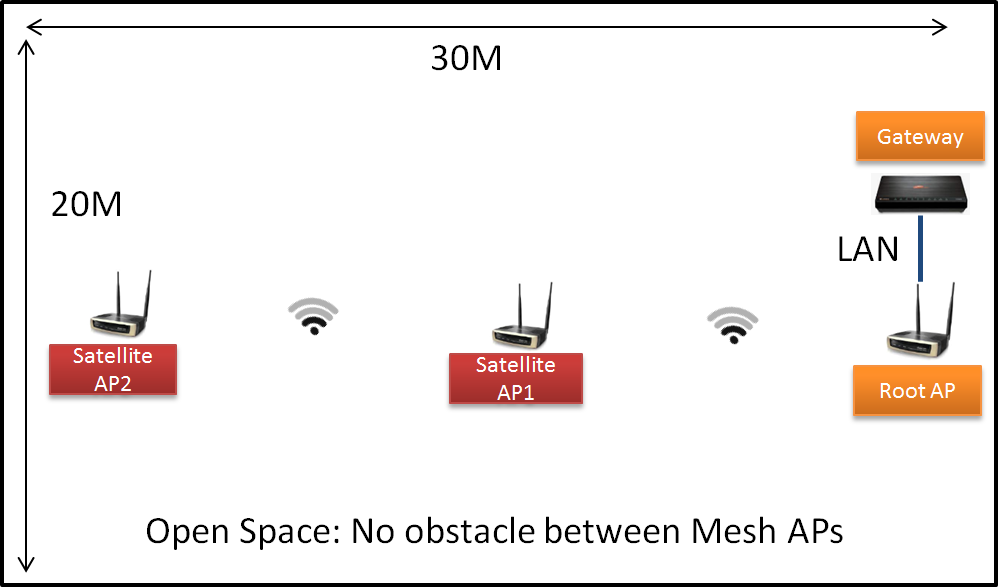 Here we plan six major items for the competitor analysis of mesh APs:

Most users are not well-trained technical gurus that are familiar with installation and setup of electronics, not to mention the mesh network systems that require multiple routers to work together. So it is quite crucial that an easy and efficient OOBE (Out of box experience) is provided by manufactures. Here we select 8 indexes to compare for those products. The test results are shown as follows: 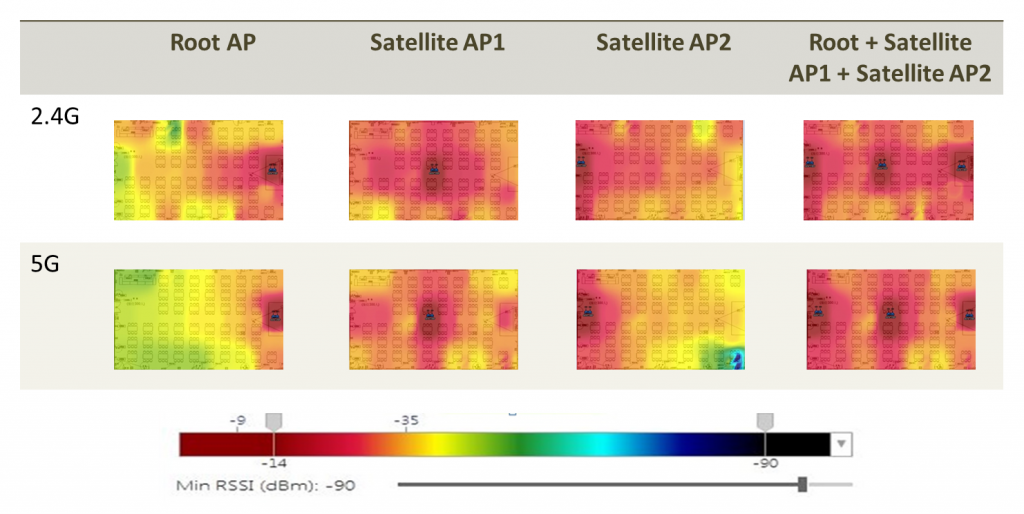 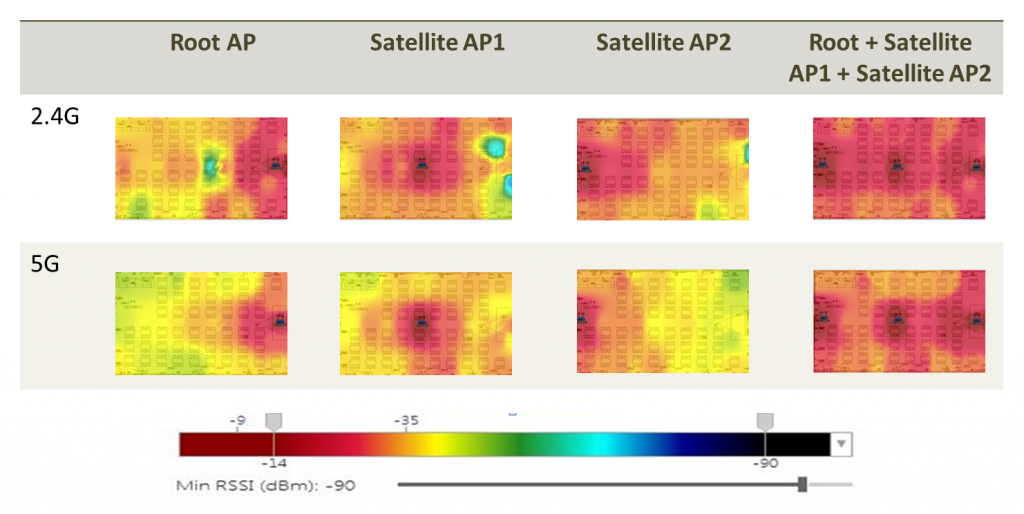 RSSI (Received Signal Strength Indication) is a major indicator of wireless signal strength. The RSSI of wireless signal that a client device can receive will determine the maximum transmission rate (PHY data rate) of that access point. The theoretical maximum PHY data rate that a 2X2 802.11n terminal device can reach is 144Mbps at 2.4GHz and 866Mbps at 5GHz. As shown in the following table, the terminal device should be able to work at the maximum PHY data rate in the environment of these 3 sets of mesh APs. However, actual throughput results will give us more information. 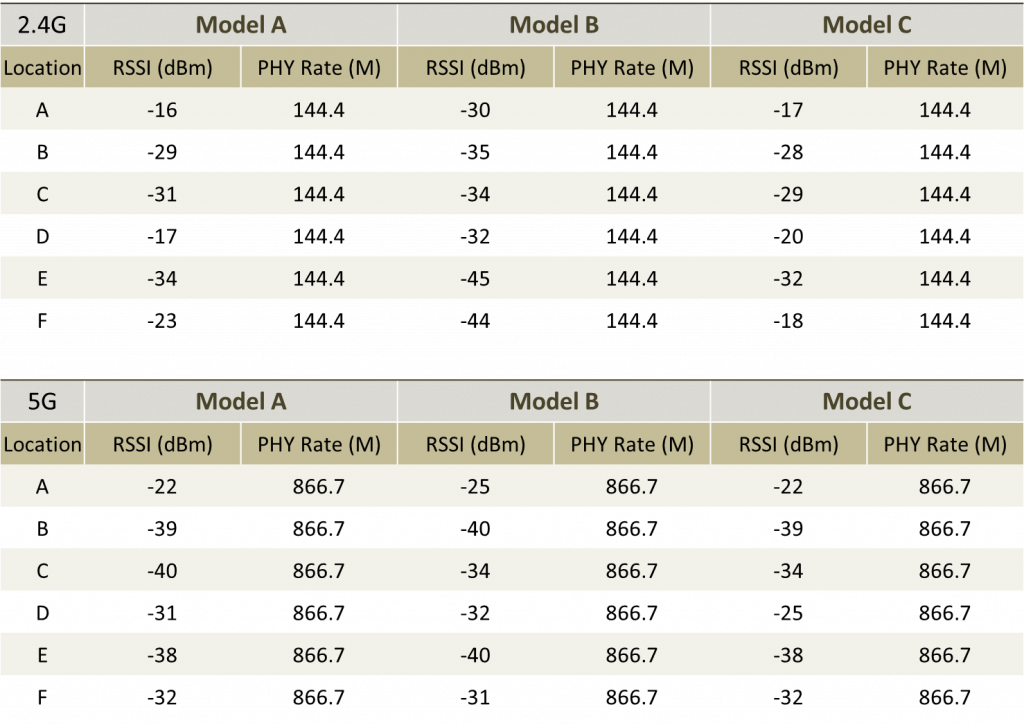 Based on the results, we can predict that the transmission speeds for terminal devices connected to AP-2 and AP-3 will be slightly lower because of the transmission through backhaul. The performance might be influenced by many factors such as firmware, placement, and interference, but we will not go into such details here.

Backhaul is mainly available in 5G. Here the backhaul performance measures the transmission capacity between mesh APs—to be more specific, the speeds between Root and Satellite, or between two Satellites. The environment setups are shown as follows. 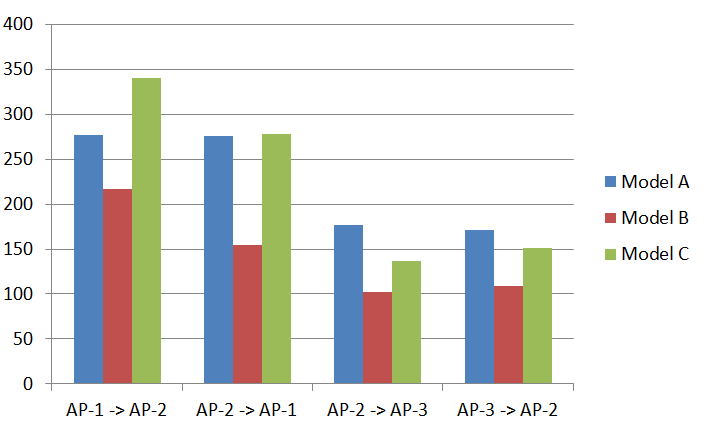 Backhaul speeds affect the transmission speeds between mesh APs. If the backhaul speed between the mesh APs is slow, the user will still experience poor connections although the signal strength received is strong. Therefore, users who are farther away from the root AP will experience slower Internet.

Normal roaming takes about 5–10 seconds. APs nowadays support seamless roaming, which means that the roaming time should be within one second or even a few milliseconds. Therefore, when networking applications are used, no interruption will occur. The roaming time is calculated by packet sniffing and measured by the interval between the last packet sent by the original AP and the first packet sent by the new AP. The measurement time will be slightly longer, but the test results will be closer to the actual user experience. For some measurements, the roaming is completed at the moment when the authentication is successfully established between the terminal device and the new AP.

The roaming time of Model B is a bit longer than that of other brands, especially between AP-1 and AP-2 at the 2.4G band, which is 7 seconds. It is probably working in normal roaming mode rather than seamless roaming.

Overall, Model C has the best overall performance while Model A and Model B have their respective strengths. As we can see, overall performance of a mesh Network will be related to various factors and each of them would be crucial to the user experience. Allion’s professional mesh Network evaluation would provide you a thorough and in-depth analysis to identify the potential risks and also indicating the possible root causes.

Figure 12: The list of test items for performance comparison

In addition to the tests mentioned above, Allion provides other mesh AP verifications and consulting services. Allion simulates the actual user scenario by using the most comprehensive collection of test equipment and powerful wireless signal measurement tools. Allion can assist vendors to accurately identify and solve mesh AP product issues with respect to connectivity, functionality and stability.

Post Views: 2,399
Technical
Latest technical blog
This site uses cookies. By continuing to browse the site you are agreeing to our use of cookies. OkFind out more here