What is Modern Standby?

System standby is an indispensable part of PC system power management. It is essential to achieve a proper balance between PC performance and limited battery capacity. For example, when a PC is not in use, the system enters standby mode to effectively control power consumption and prolong the usage time. Standby mode wakes PCs much faster than a computer startup does.

Modern Standby is developed from the traditional standby model (S3), which was first introduced as “Connected Standby” under Windows 8. After the upgrade to Windows 10, the standby mode was subsequently updated and renamed “Modern Standby”.

The concept of Modern Standby is similar to how smartphones operate—the user can use the phone immediately after waking and unlocking the screen. When the screen is turned off, the smartphone can still receive messages from communication apps because it is still connected to the internet.

The biggest difference between Modern Standby and the traditional S3 is that network connectivity is preserved in the background. While in Modern Standby mode, the system will optimize itself by delaying non-system critical functions (such as peripheral input/output functions) while keeping emails, notifications, and other network activities up to date. However, if the system is not running network activities, it will enter the “Deepest Execution Time Idle Platform State” (DRIPS), which is the best power saving mode for PCs.

1. Faster Wake Time
Compared with the traditional S3, the system in the Modern Standby mode wakes up and responds faster while saving more power than S0. We can see this from the following figures: 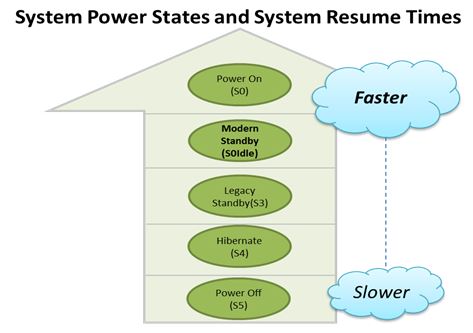 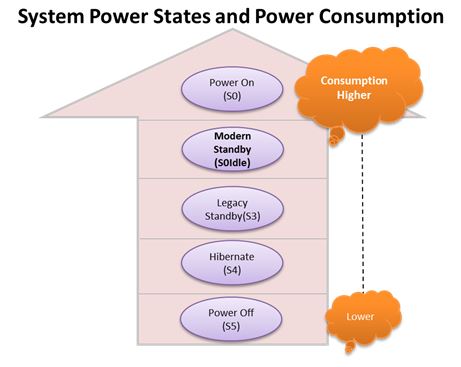 In terms of platform support, Modern Standby is available on 70% of the Ice Lake systems while nearly 100% on Tiger Lake systems. The method to check whether your PC or laptop supports Modern Standby is pretty simple. You can enter “powercfg /a” into the Command Prompt (CMD) and press Enter. If “S0 Low Power” appears as available, it means that the user may enjoy the instant wake experience brought by Modern Standby. 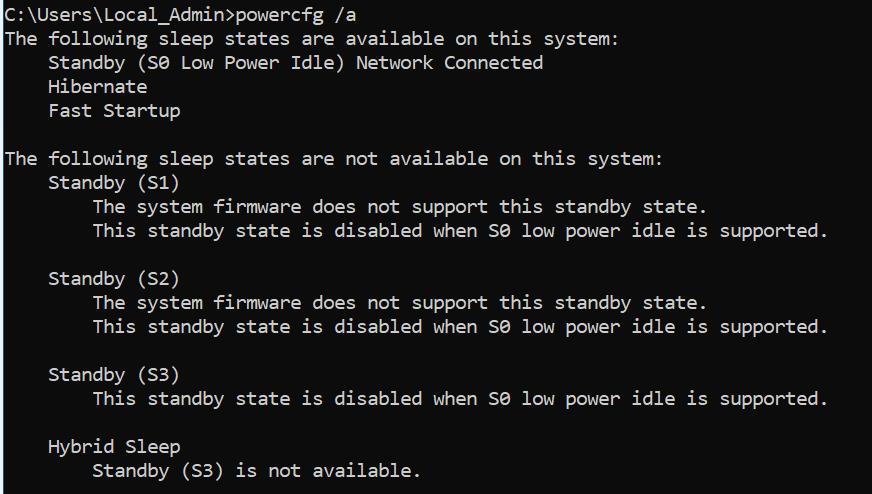 Hybrid SSD-HDD storage systems can speed up the recovery time and save power by storing data in flash memory rather than in spinning disks. On the contrary, traditional hard disk drives (HDDs) increase the HDD buffer to support Modern Standby. Since the speed of the read/write head will affect the resume time caused by the writing motion, and the spinning disk will increase the power consumption. In other words, Modern Standby does not require high-end hardware and can effectively run on existing hardware.

In order to ensure that the relevant component modules can meet required specifications, Intel and Microsoft have used the Intel Reference Validation Platform (RVP) as a basis and developed the Modern Standby Compliance Process.

When a computer enters a deep sleep mode, how much power it expends is critical to the battery life of the entire device. Modern Standby certifications measure the power consumed during low-power states. According to ACPI, D3, the lowest-powered state, indicates that the system will enter sleep mode when it is idle. D3 is further divided into two power substates, known as “D3 Cold” and “D3 Hot”. Compared to D3 Hot, D3 Cold conserves more power because all power has been fully removed.

Response time is also a very important item of Modern Standby. According to the specification, the system must be made ready within 1000ms to enable an instant on/off user experience.
Now we will use the NVMe, which is the dominant storage system to illustrate these key factors below:

Based on Modern Standby, the Exit Average Latency should be within 1000 ms and power measured should be lower than 5 mW. After the NVMe-based device enters D3, the average test value of power measured (mW) is only 1.5 mW and the device can wake up from sleep mode in 450ms. This indicates that PCIe NVMe is capable of giving users an instantaneous wake from sleep mode. When the user presses the power button, the system can wake up correctly and be ready-to-go within 1 second.

In this test, we found the average test value of power measured (mW) in D3 is 0mW (<1mW), which implies that NVMe consumes a minute amount of system power. Moreover, the average test value of Exit Average Latency is 500ms, showing that the device only takes 500 ms to wake up from the sleep mode. NVMe in D3 Cold indeed saves power while featuring fast startup from the lowest-power state.

In summary, Modern Standby is equipped for immediate use through the support of hardware and software. Since little power is consumed in Modern Standby, the system is able to deliver longer usage time. Allion’s complete Modern Standby testing services ensure that the components on the system can meet the relevant certification specifications, so that PCs can bring that instant-on readiness to all end users.

Post Views: 2,603
Technical
Latest technical blog
This site uses cookies. By continuing to browse the site you are agreeing to our use of cookies. OkFind out more here