Audio-Video Unsynchronization Ruining Your Display? Here’s What To Do About It

Allion Labs > A/V > Audio-Video Unsynchronization Ruining Your Display? Here’s What To Do About It

After a busy day, the best thing for modern people is to lie on the sofa and enjoy audiovisual entertainment on the screen or on TV. However, have you ever experienced AV out-of-sync problems? That is, the audio appears faster or slower than the screen. This is a problem called “AV out-of-sync”, which is really frustrating. Nevertheless, there are many factors for such AV out-of-sync problems, so let’s get to know the possible causes of this situation first.

The AV out-of-sync problem may occur due to the process of video file conversion, so you may try and play any other video file instead, to confirm this problem.

If you’re watching a video on the Internet, it may be the unstable network or insufficient bandwidth that leads to the AV out-of-sync problem.

If you’re using a digital set-top box to play videos, the most probable factor may be that the software itself is defective or it has poorer compatibility with the digital set-top box. This factor is also very common on computers. The AV out-of-sync problem often occurs due to decoding problems, so you can just solve it by replacing the decoder or player.

The AV signal latency may be caused by insufficient system memory or by incompetent decoding ability of the CPU or GPU. These problems can be solved by means of hardware upgrades.

5. AV out-of-sync due to the screen itself

After receiving signals, the screen itself will process audio signals and image signals respectively. So, signal latency may occur due to signal processing. Usually, the AV out-of-sync problems caused by the screen itself are most likely to be ignored.

In this article, we intend to discuss the AV out-of-sync problem due to the screen itself. This kind of problem usually gets less attention, and ordinary consumers may rarely notice that the audio and visual signal latency is likely to occur because of the screen. However, despite the foregoing situations, once this problem occurs and is noticed by consumers, it may severely affect a consumer’s trust in such a product, so it is an issue that should not be ignored.

Note: Source of the image “Sync One2 User’s Manual”.

So, let’s go back to take users into account. Can a person sense the AV latency within the foregoing scope of the reference values? In fact, general users can barely sense any latency below 60ms, yet the sensation of AV latency becomes a bit stronger when it goes above 60ms. One can significantly feel the asynchronization when it is above 100ms.

In the previous chapter, we mentioned the impossibility to achieve one hundred percent of AV synchronization. So, is there really any  AV out-of-sync problem on the screens commercially available on the market? What degree will the latency be? We used Sync One2 (an AV latency measurement tool), to serve as our measurement tool in order to check whether the latency on a screen reach the foregoing scope of recommended value.

The are two holes on the measurement tool Sync One2, which are respectively used for microphone and light sensor. On the left side of this instrument, there is an Audio 3.5mm hole, which is the acoustic reception hole that can relate to a microphone or audio cable to receive the sound. It can be combined with a light sensor to sense the changes of light and shadow. Based on the test video provided by Sync One2, we can calculate the situations of AV synchronization latency, and the measurement results will be shown in the middle of the display screen. 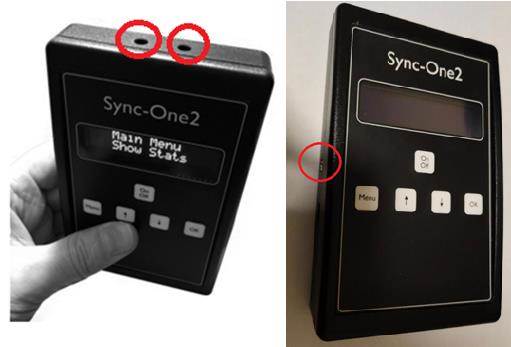 The test video provided by Sync One2 is in “mov” format. The content of the video mainly consists of the constant changes on bright and dark screens. When there is a change on the brightness and darkness of the screen, it emits a sound so that Sync One2 can receive the light/shadow and sound to calculate the situation of AV latency. This is shown in the following diagram.

Next, we measured Dell C2722DE to observe the situation of AV latency. The video format and parameters used in the tests were selected and shown in the following table. 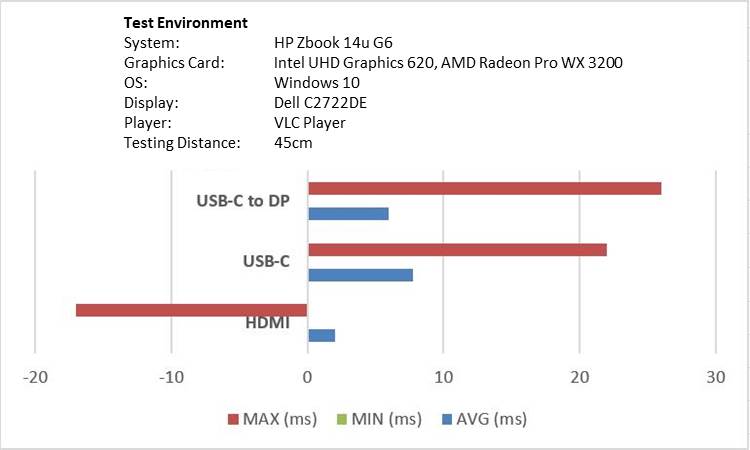 The different interfaces of Dell C2722DE under the measurement environment were respectively HDMI, USB-C, and USB-C to DP. The AVG and MIN of the measurement data were good enough, almost without latency. Occasionally, some values were bigger in the process of the measurements. Nevertheless, the MAX was respectively -17, 22, and 26ms. So, in terms of human sensation, people would be far less likely to sense such AV latency whatsoever.

When watching the screens, different users usually prefer different habitual distances. Thus, we measured the screen performance when users were at different distances. For general users, the most common distance was around 45~90cm. Let’s see the influence. 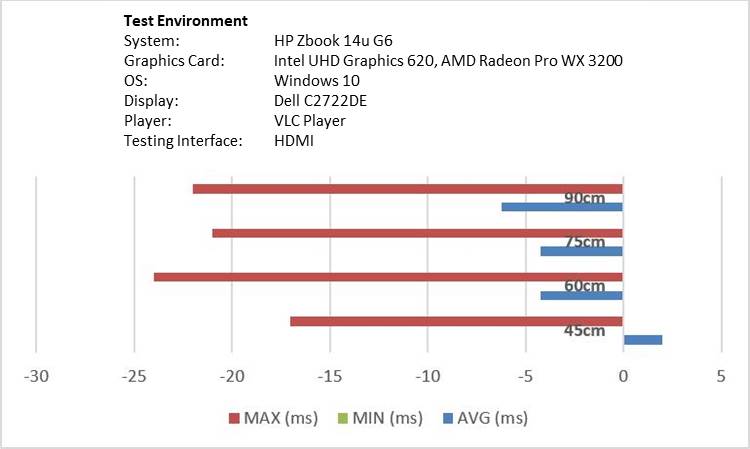 According to the measurement results, the AVG, MIN, and MAX were good enough, while the numerical differences measured at different distances were not big. Thus, when it comes to the watching distance for a user, as long as the position of the user is not at a very long distance, e.g. the watching distance that is above 10 meters, there is usually no occurrence of significant AV latency due to different distances.

Let’s checked the situation of AV latency on other screens. The Acer H277HU, Lenovo Thinkvision x1, and ASUS PB287Q were measured. The environments and the measurement results are shown in the following table. According to the measurement results, Acer H277HU had better performance in AV synchronization, while Lenovo Thinkvision x1 and ASUS PB287Q revealed higher AV latency in such an environment, which indicated poorer performance in AV synchronization. 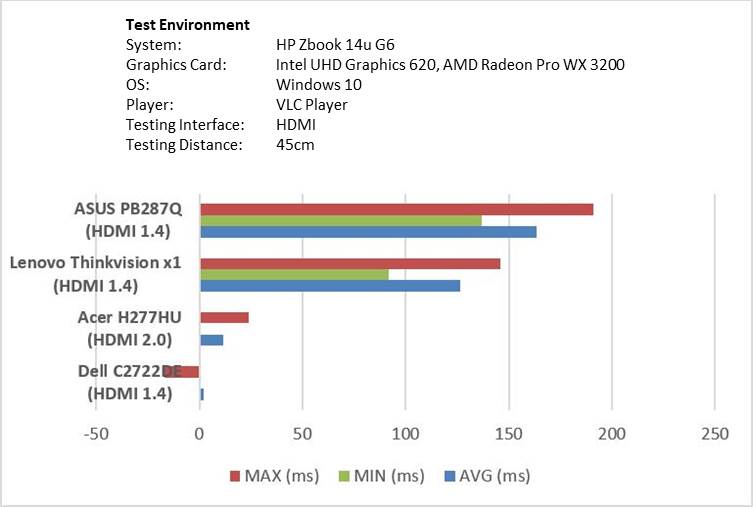 From the foregoing content, we learned that AV out-of-sync problems can occur on screens. How about on projectors? In addition to the purpose of family entertainment, projectors are more likely to be placed in bigger places, such as indoor meeting rooms, exhibitions, and even outdoor areas. When the watching distance becomes longer, the latency of the connected speakers and the places of placement location may become influential factors.

Let’s have a look at the latency issue on projectors. Based on a general family entertainment scenario, the projected image is usually about 120cm away from the projector and users. The speaker is an in-built speaker in the projector, rather than an externally connected speaker. The environment and the measurement results are shown in the following table. 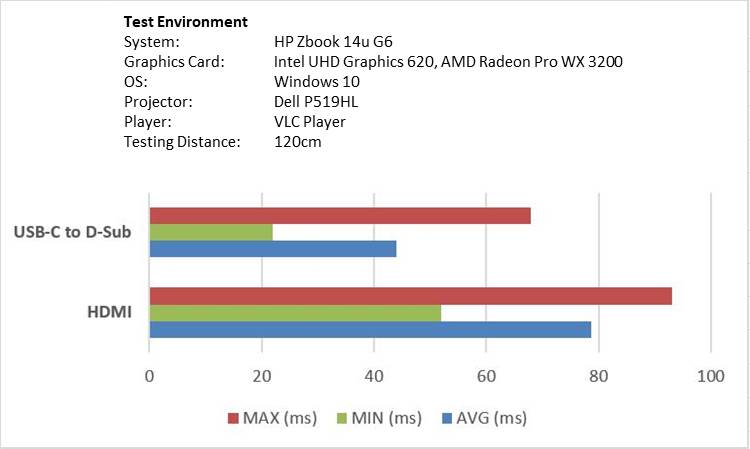 According to the measurement results, if compared with the screen “Dell C2722DE”, this projector Dell P519HL revealed significant AV out-of-sync problem in the HDMI interface. The AVG, MIN, and MAX were respectively 78.75/ 52/ 93ms. The MIN was almost close to 60ms, while the AVG also exceeded 60ms. The MAX reached 93ms. This means that when people are watching the screen, they may probably feel somewhat of AV out-of-sync problem. However, the AV out-of-sync problem is less noticeable in the D-Sub interface than that of HDMI. Nevertheless, the MAX exceeded 60ms, so perhaps some people may feel a little bit of asynchronization problem.

As for wireless projection measurements, we used the two screen-mirroring devices “Google Chromecast Ultra” and “Actiontex ScreenBeam 960”, accompanied by the screen “Dell C2722DE”. The environments and measurement results are shown as follows.

The wireless projection technologies used in Google Chromecast Ultra and Actiontec ScreenBeam 960 were respectively “Google Cast” and “Miracast”. We measured the situations of Broadcast and Screen mirroring. According to the measurement results, we could see higher latency overall. After all, it was conducted by means of wireless projection which may be affected by the Internet, so such a situation was expected. In addition, the two wireless screen-mirroring devices presented better situations of AV latency obviously in the projection way of Broadcast than those of Screen mirroring. The MAX even reached -234 and 748ms in Screen mirroring,  which was a more serious situation of AV out-of-sync.

Currently, some digital set-top boxes also support wireless projection. We measured the situations of Broadcast and Screen mirroring when MiBox S was combined with the screen Dell C2722DE. The measurement results also indicated that the AV synchronization situation would be better in Broadcast. When it was changed to use Screen mirroring, serious AV out-of-sync problems would occur, while the MAX also indicated a high latency of up to 741ms. 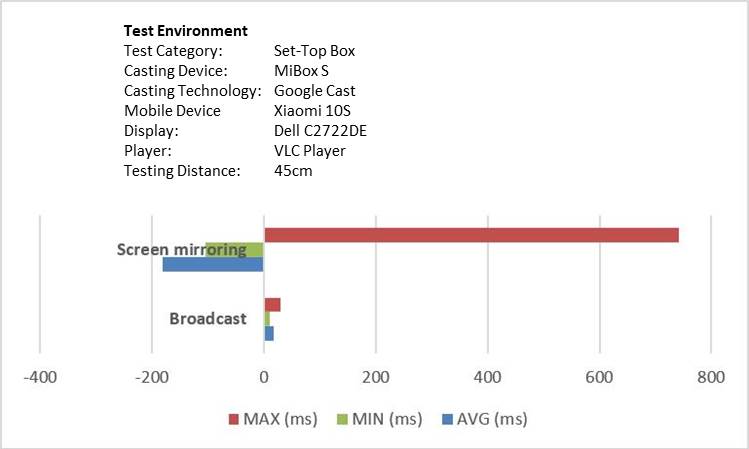 AV synchronization may affect a user’s overall audiovisual entertainment experience as well as product quality. From the foregoing experiments, we can learn that AV out-of-sync problems may occur on the screens commercially available on the market. If compared with the screens that have less AV latency, the sensation is especially stronger. For consumers, such a screen-watching experience will be a key indicator in product selection. Therefore, it is a problem that deserves our attention very much. Thus, Allion Labs organizes the following tests for AV synchronization:

In addition to the foregoing tests and plans, we can also provide you with customized test plans for your products in order to achieve the best testing effects. Allion Labs has the confidence to safeguard the quality of your products!

Post Views: 155
Technical
Latest technical blog
This site uses cookies. By continuing to browse the site you are agreeing to our use of cookies. OkFind out more here