What Is a KVM Switch?

Due to the COVID-19 pandemic, remote work has become mainstream. In order to balance work and entertainment, most people have multiple computers or gaming consoles at home. However, each computer or console must usually be equipped with a set of monitors, keyboards, and mice. Problems such as taking up too much space and switching between computers can be very troublesome. To solve these problems, a KVM switch would be your best bet.

KVM is an acronym for keyboard, video, and mouse. It’s a device that allows users to control multiple computers through only one set of keyboard, monitor, and mouse, saving money and space while increasing productivity. In the past, engineers had to deal with hundreds or thousands of servers. However, with a KVM switch, only one set of controls are needed, so there’s no need to physically go to each server. A powerful tool for efficiency is the KVM hotkey, with it you can quickly switch to any server. Below are some advantages of the KVM switch: 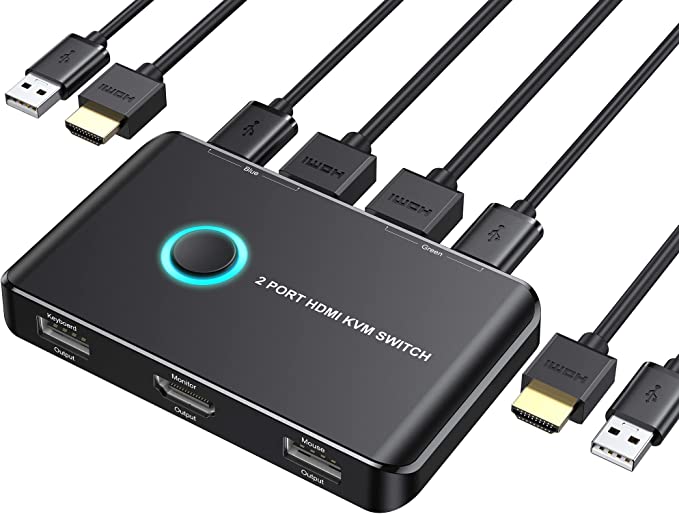 The maximum number of computers or servers that can be connected to each KVM switch varies and the number of ports on a KVM switch can range from 2 to 64 ports. In the picture above, the KVM switch has 2 ports.

A KVM monitor is a monitor that has a built-in KVM switch, which saves users from buying a separate KVM switch. The usage of the KVM monitor is shown in the picture below. You only have to connect the different systems to the multiple upstreams ports in the monitor, then connect the shared keyboard and mouse to the USB ports (downstream ports). After setting things up in the on-screen menu, you can switch between multiple systems easily! 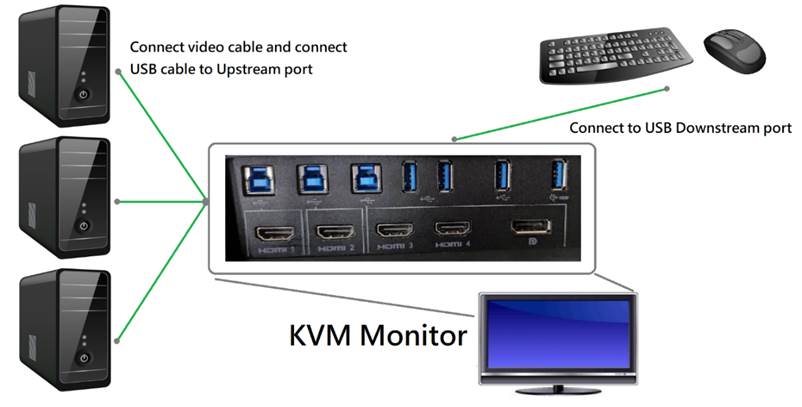 KVM monitors have similar advantages to a KVM switch, making them suitable for homes and offices. It’s also very convenient to use them for entertainment purposes, allowing for the user to switch between different devices without having to unplug wires. Although the KVM monitor is convenient, there are two small drawbacks:

In theory, KVM products are very convenient and have many advantages, but are there any risks behind them? Allion’s bug report analysis and feedback from Amazon users are compiled into the diagram below: 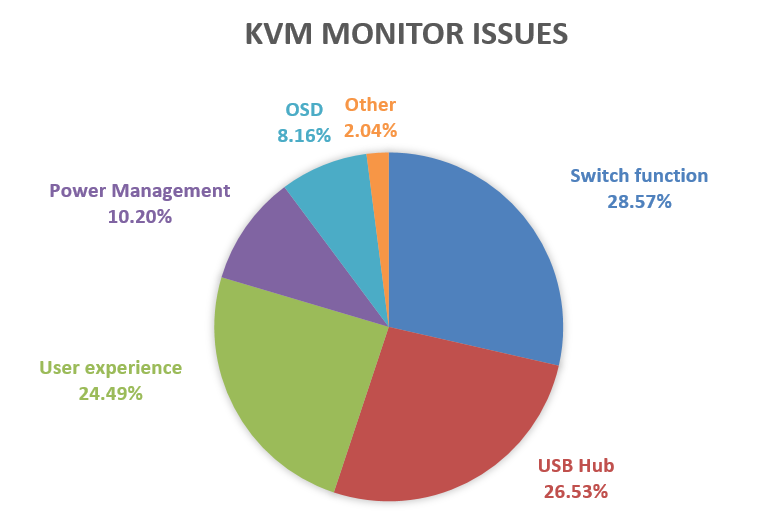 The switch function, USB hub, and user experience take up the highest percentage of the issues, with almost 80% combined together. Allion has analyzed these three issues more in-depth.

The first problem, the switch function, refers to problems while switching devices, functional defects, or conflicts between functions, such as:

From the issues listed above, other than bugs that the KVM function has itself, it’s also very easy to encounter problems when the KVM monitor enters power-saving mode or connected devices are shut down. In addition, the built-in KVM may also have conflicts with other functions of the monitor, causing inconvenience to the user.

The second problem, the USB hub, refers to problems such as:

The third problem, user experience, refers to issues from Amazon reviews, consisting of feedback mostly related to product design rather than bugs:

Testing and Services For KVM Monitors

While KVM monitors bring users convenience, according to the bug analysis and user feedback, these products can also cause trouble for users. In order to effectively improve the quality of KVM monitors, Allion’s professional engineering team has designed the following tests:

Allion has a rich and diverse range of over 3000 KVM monitor testing products including operating systems, mobile phones, tablets, game consoles, set-top boxes, adapters, keyboards, mice, headphones, pen drives, external hard drives, webcams, and more. There are also more than 700 monitors for verification and comparison, covering a variety of brands on the market. If you want to know more or have related product testing needs, feel free to contact us through a contact form or email. Our service team will gladly provide exclusive services for you!

More like this: The Convenience and Importance of the USB Hub!

Post Views: 239
Technical
Latest technical blog
This site uses cookies. By continuing to browse the site you are agreeing to our use of cookies. OkFind out more here