Gaming controllers are devices that allow gamers to control operations in games. Such devices include:

Gamepads are the gaming controllers that we are most familiar with. In general, this product boasts the most varieties with the greatest sales volume. Different from the conventional impression that controllers are merely used in game consoles and computer games, there are game controllers exclusive for mobile phones or tablets available on the market recently. 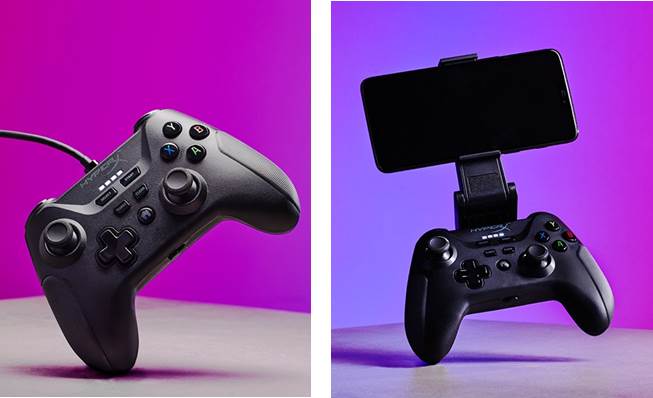 Thanks to the stay-at-Home economy under the impact of COVID-19, the sales volume in game-related industries has been increasing rapidly. According to an analysis report made by Emergen Research, the global output value of gaming controllers reached USD 1.78 billion in 2020. It is estimated that the global output value will reach USD 3.49 billion by 2028, while the compound annual growth rate is estimated to be 8.9% from 2021 to 2028.

In recent years, the rapid growth of mobile games has become the greatest factor contributing to the growth of gaming controllers. In 2020, the number of mobile game players amounted to 200 million simply in the USA. Gaming companies all rush to the fore to develop mobile games for gaining short-term profit growth. Thus, controllers exclusive to mobile phones have also benefited from this phenomenon. As for mobile games, numerous players spread all over the world in competitive games such as “Arena of Valor” and “PUBG: Battlegrounds”. There is a tendency for competitive game players who would like to use dedicated controllers with enhanced comfort and maneuverability.

Being a professional testing company, we care about various kinds of issues regarding the quality or designs found in our products that have been sold on the market. Therefore, we conducted some research on a controller manufacturer who always gains big profits on Amazon. We observed two models of its best-selling wired controllers and wireless controllers, and then compiled most of the negative comments with 1~2 star left by consumers on the website, which has been summarized as follows: 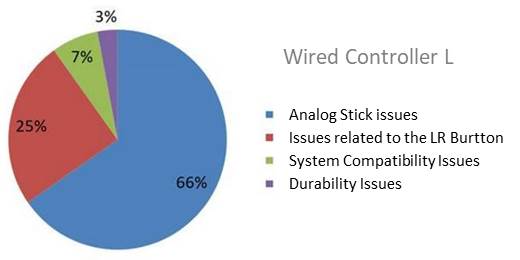 The so-called “analog stick” consists of the element on a gaming controller that is used for direction control. It is primarily used in first-person or third-person games nowadays, which is a kind of d joystick that can control characters’ various movements in 360° directions.

Introducing the Dead Zone of the Analog Stick

The dead zone on a stick refers to the inaction when a stick is slightly pushed within a certain scope (The scope size is depending on the configuration of a stick. Some controllers can be calibrated via software). It is no use pushing the stick slightly. Only when the stick is pushed beyond this scope in a game can a player receive data and make movements accordingly. The smaller the dead zone is, the more sensitive it is. An FPS game is more likely to need a dead zone with a smaller scope setting. However, if the setting value is too small, the phenomenon of drifting may appear. For example, the characters in a game may move by themselves even when the player does not touch the stick.

Usually, manufacturers will not especially indicate the scope of the dead zone in product specifications. There are no specific regulations regarding how large the scope of a dead zone should be. However, action game players who usually care much more about game operations will prefer that the smaller the dead zone scope is, the better it will be.

Basically, analog sticks are one of the two major elements tremendously applied in all the games. An analog stick is involved with precision and stability in the process of operations, while LR Trigger Button is the main default button for firing and attacks in a game. Thus, the length of the stroke, the sense of force feedback, and the latency may all affect the gaming experience.

The main negative feedback about a wireless controller is a common issue; that is, the problem severity lies in disconnection and latency in wireless products. These poor phenomena should be spotted and solved earlier, by means of the tests on wireless performance, stability, and anti-interference.

Since the performance of analog sticks is usually criticized by many consumers, we conducted verification tests based on our curiosity. We used the testing equipment exclusively researched and developed by Allion Labs, to conduct high-precision push on the selected analog sticks of the controllers. Based on 0.05mm as one unit, we conducted 13 pushes (the push stroke distance of the analog sticks sold on the market is about 6.5 ~ 7.5 mm or so) respectively to the bottom, left, and lower left, starting from the default center of the analog stick. Next, we used the display function “HTML5 game controller API” on Gamepad.tester (a website exclusive for game controller testing), and then recorded the coordinates reported by every push. We observed the shifting situation of every coordinate per a cycle of 5 repeated pushes under the operation with fine-grained precision that is difficult to be achieved merely by human thumbs. In this way, we can observe the stability of an analog stick. 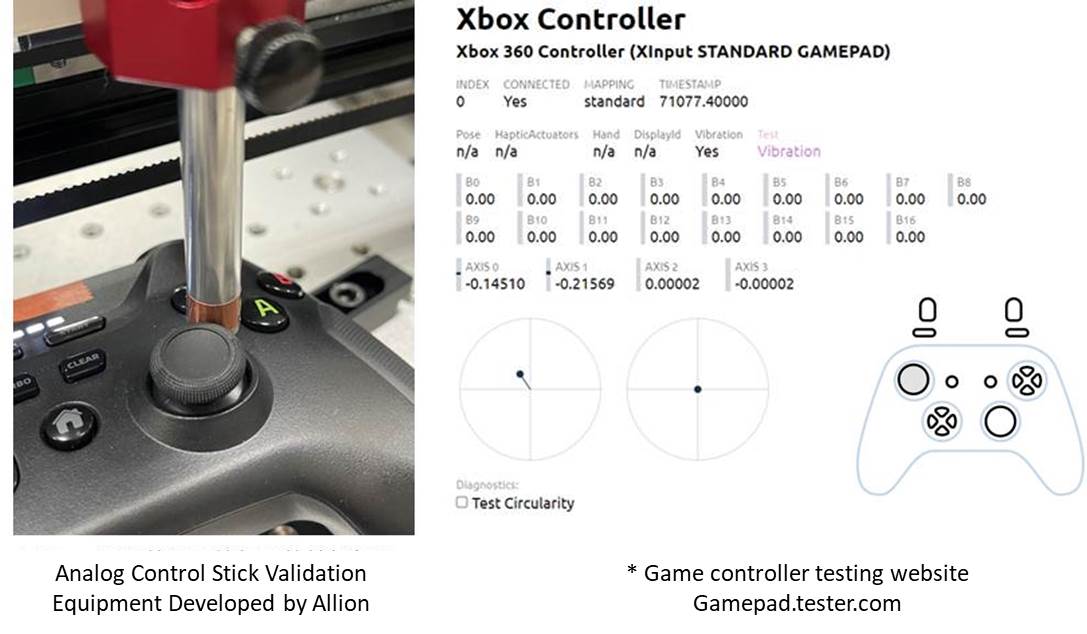 We selected two models of standard 360° gaming controllers, namely Controller A from Company H and Controller B from Company M, to serve as the subjects to be observed in the tests.

First, let’s have a look at the stability performance of Controller A in three directions: 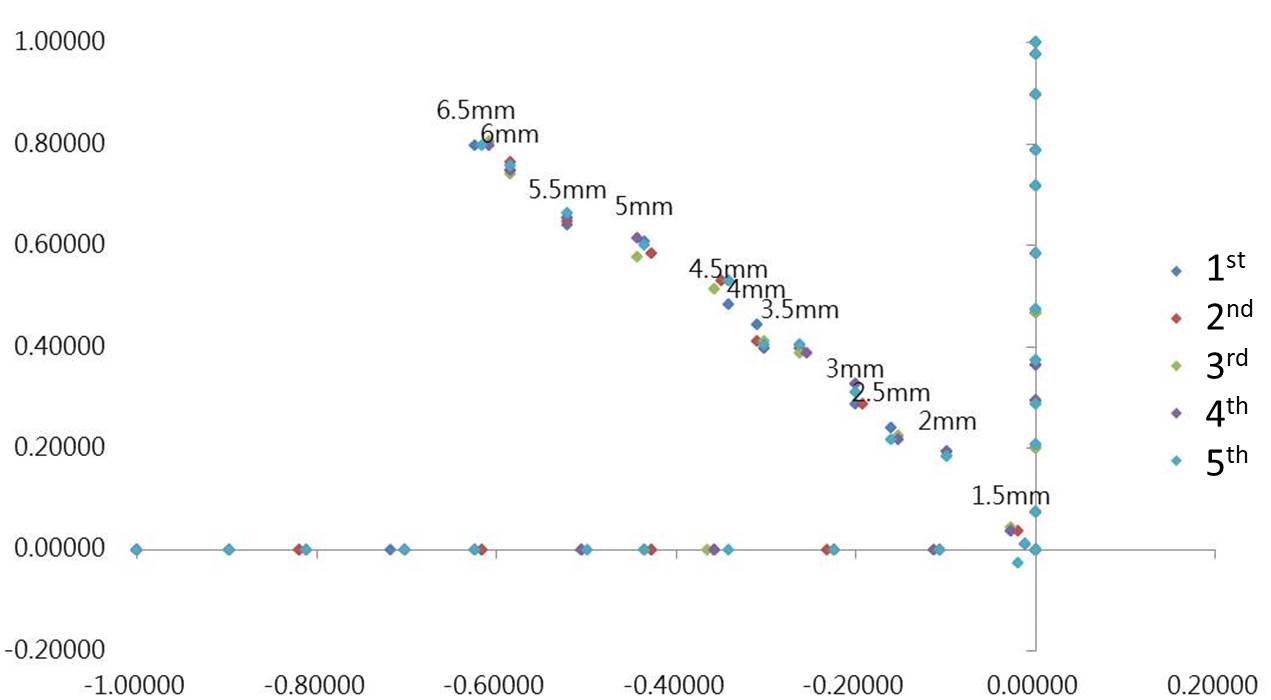 We can see that the coordinates of every fixed push towards the three different directions are quite intensive. Most of the coordinates can perfectly overlap with each other, which means insignificant drifting; in comparison, the controller can offer relatively stable operations. In addition, data begins to return after 1.5mm has been pushed from the center, so the dead zone is about 1.5mm. This is an excellent controller with relatively stable analog performance. 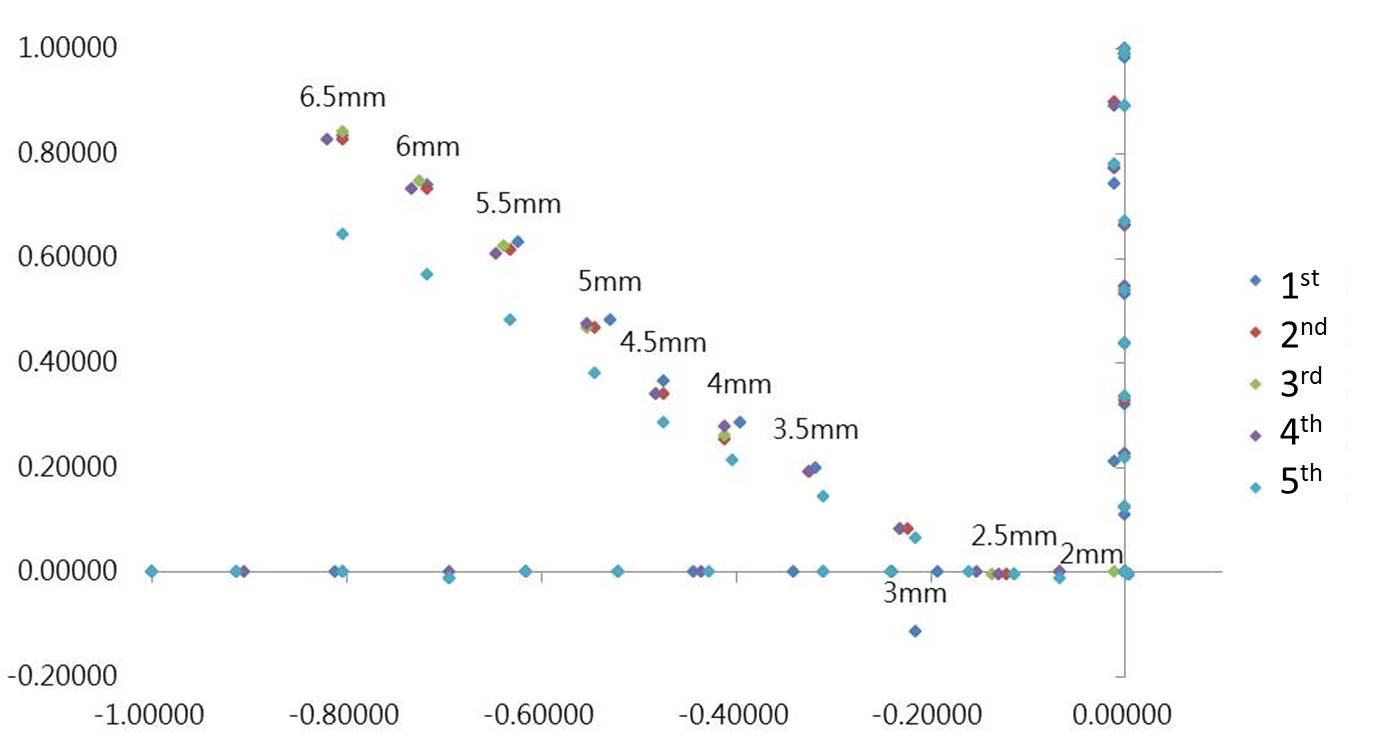 In comparison, the coordinate layout of Controller B’s coordinates is more dispersed. Especially, when there is a diagonal shifting, all the coordinates may sometimes deviate significantly. During vertical pushing, it is more unstable compared to Controller A. Besides, data will begin to return after 3mm has been pushed, so the dead zone of this controller is about 3mm; it has a greater scope of configuration. In actual gaming experience, we also discover that slight drifting appears indeed.

By observing these data, we can have an overview of the stability inclination of analog sticks. Although manufacturers do not have an open standard for the performance of analog sticks, however, a slight deviation may probably affect the overall experience of the gaming operation. Nevertheless, since these highly-priced gaming controllers are known as “gaming level”, they should be able to offer higher stability and precision for players who pursue precise operations.

In addition to the foregoing verification examples, Allion Labs, who has many years of testing experience in various computer peripherals and who is very familiar with the fields cared by consumers, suggests the following tests to safeguard the overall quality performance and compatibility of gaming controllers, by reviewing the poor feedback we’ve observed on actual markets:

Allion Labs has rich experience in testing gaming peripherals. With a variety of testing environments for mobile phones, computers, laptops, gaming consoles, etc. accompanied by the software, hardware, and testing tools exclusively researched and developed by us, we can customize your unique testing plans based on your needs. We can assist our clients in selecting more stable products and suppliers, thereby reducing post-sales costs of different channels as well as customer complaints. If you have any doubt about the quality and performance of your products, please feel free to contact us, so that we can provide you with your exclusive testing service based on your needs.

Post Views: 138
Technical
Latest technical blog
This site uses cookies. By continuing to browse the site you are agreeing to our use of cookies. OkFind out more here