Among all these features, Generic AMP is a major breakthrough of Bluetooth technology. That is, when large amounts of data need to be sent, the high speed alternate 802.11 PAL will be used for data transmission through AMP. In addition, UCD permits small amounts of data to be sent without establishing L2CAP channel. It is intended to lower the reaction time and power consumption while rapid connection or small data transmission is needed. Last, EPC allows devices to enhance the capacity of power control to support multiple modulation modes, so that can optimize the transmission distance.

How does the Bluetooth multi-mode application begin? In fact, Bluetooth SIG which proposed the concept of integrated wireless communication in 2007 tried to take UWB, NFC, Ultra Low Power, Wi-Fi, and other communication technologies under the Bluetooth technical architecture. That is why as mentioned above, the following revision of Bluetooth v3.0 + HS adds the technological application of Generic AMP and 802.11 PAL.

Another significant feature of Bluetooth v4.0 + LE is the so-called Single-Mode and Dual-Mode. In Single-Mode, Bluetooth v4.0 + LE can achieve the purpose of low-energy transmission through simple device searching and point to multi-point data reansmission. And in Dual-mode, Bluetooth v4.0 + LE can co-work with different Bluetooth specifications, such as Bluetooth v2.1 + EDR and Bluetooth v3.0 + HS, and then users can switch the operations of high-speed or low-energy upon ones’ demand. Therefore, the manufactures can adopt the appropriate mode, based on the purpose of device-using more flexible. For example, Single-mode can be applied on some devices which need long time but no sustainable data transmission, and Dual-Mode can be applied on some devices which need to transmit with other different products (such as computer or mobile phone) simultaneously. 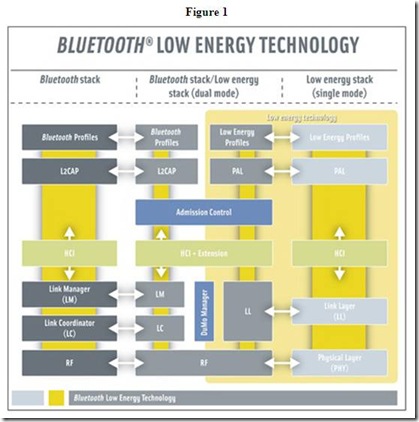 Post Views: 1,239
Technical
Latest technical blog
This site uses cookies. By continuing to browse the site you are agreeing to our use of cookies. OkFind out more here