The launch of Wi-Fi 6 has brought high-speed transmission technologies to the next level. When transmitting data via Wi-Fi 6 (802.11ax), the Received Signal Strength Indicator (RSSI) value required is higher than that of Wi-Fi 5 (802.11ac). This is true when in 2×2 antenna spatial streams and 160MHz Bandwidth, and the data rate can reach up to 2402 Mbps. However, in the existing Wi-Fi 5 (802.11ac) test environments, the data rate can only reach up to 1.9 Gbps, which is lower than the maximum throughput rate of Wi-Fi 6 (802.11ax).

As Wi-Fi technologies evolve from 802.11ac to 802.11ax, test environments need to be upgraded to host testings for ultra-high-speed transmissions, and we can achieve this by modifying the hardware designs. That is, increasing the ability of spatial streaming by adding more antennae. Adding various types of antennae can also boost higher transmission intensity.

The following figure shows the data rate displayed by the Windows internal network card. As you can see, there is an increment in data rate, from 1.9 Gbps to 2.4 Gbps, reaching the maximum data rate of Wi-Fi 6. 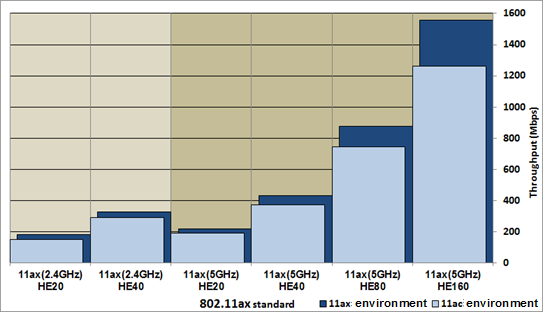 Allion has conducted tests on three other laptop systems in the new test environment. Let us take a look at the Throughput Performance of each laptop. 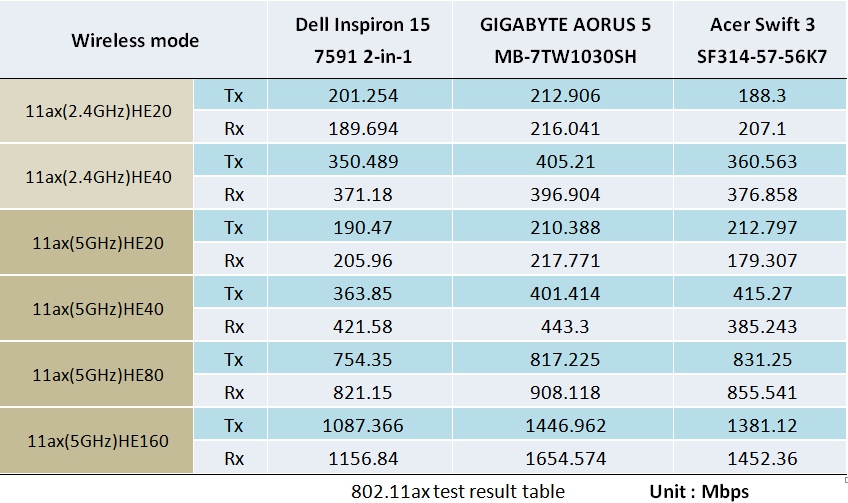 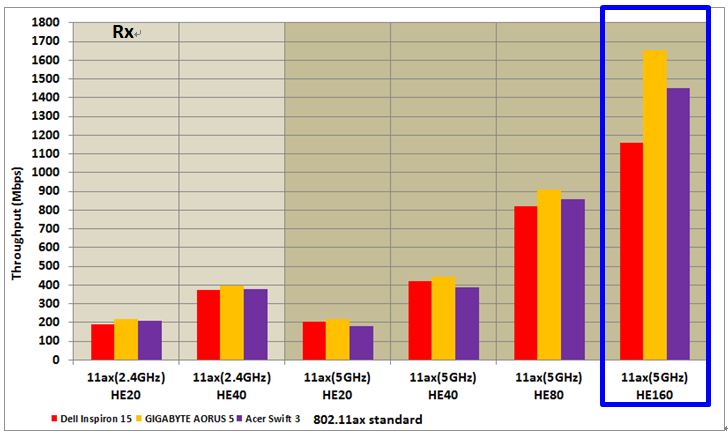 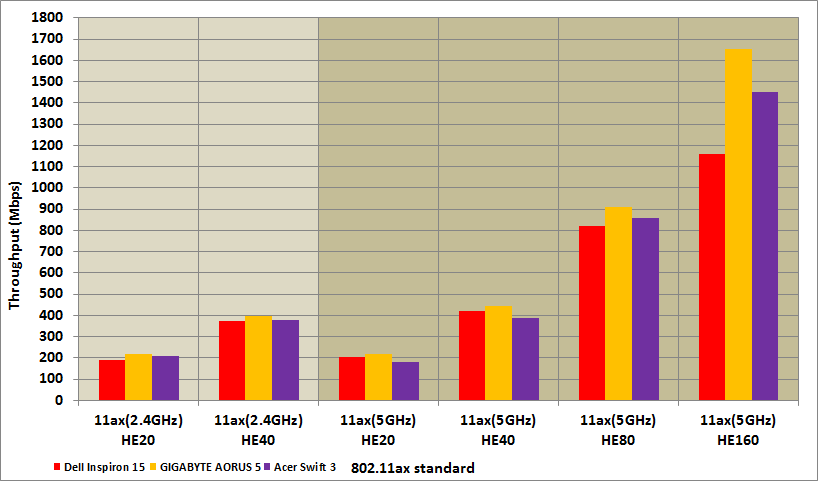 Judging from the test results, we can see that there is only a slight difference in data transmission among the three laptops in the low and medium rate modes. However, there is a significant difference in the high rate mode (HE160). In other words, if the test environment fails to meet the requirements of 802.11ax, it would be difficult to verify the high-speed performances of different devices.

In order to find out, we tried to adjust the placement of the Dell laptop when testing its throughput rate. We reversed the Dell laptop by 90 degrees (as shown in the diagram) to change the test angle of the antenna, and then test the Throughput Performance again. We found out that the uplink and downlink transmissions were improved by nearly 40% (as shown in the table), leading to a conclusion that antenna patterns can greatly affect the wireless transmission capability.

Wi-Fi 5 (802.11ac) has been used long enough and become the main wireless technologies used for electronics and wireless devices. But after the launch of the next-generational Wi-Fi 6 (802.11ax), wireless experience has been brought to the next level. This version of wireless technology highlights features such as higher speed and low latency, bringing a better experience to users in modern-day use cases.

In the development of next-generational products, antenna patterns can bring impacts to wireless transmission performance. When designing a wireless device, it is essential to take antenna placement and pattern into consideration during the developmental process. And do not forget that product validations are equally important in ensuring the quality of wireless devices.