Battle of the 4th Gen Connectors: USB4 vs. Thunderbolt™ 4

USB4 and Thunderbolt™ 4 are powerful and convenient. Both use USB Type-C as a unified interface, and both can perform multiple functions such as screen display, charging, and data transmission with only one cable.

The Evolution of USB

Nowadays, USB (Universal Serial Bus) is very common in our daily life and is currently the most popular transmission interface among all technological products. It is vastly used in computers, cellphones, and various kinds of peripherals, also extending to products of other fields.

In the very beginning, it was Intel and Microsoft that initiated and launched USB, in order to solve connection problems in various devices and peripherals related to computers. The purpose of its design was to be able to use it as plug and play. UBS 1.0, with a data transmission speed of 1.5Mbps (low-speed) and 12Mbps (full-speed), was launched in 1996, yet it was not very popular on the market.

It was not until 2000 when it came the USB 2.0 era. Theoretically, the transmission speed was 480Mbps. As numerous personal computers supporting USB interfaces became popular, USB has gradually become a standard interface for every personal computer. However, it was also at this moment when various kinds of USB interfaces appeared, which confused people. These USBs are shown in the following picture.

In 2008, USB 3.0 was released. Theoretically, the transmission speed was significantly increased to be 5Gbps and is compatible with USB 2.0 downwards. Nevertheless, compared with USB 2.0, there were somewhat differences in such an USB interface, This worsens the complexity of chaotic USB interface specifications.

Later, two renaming crises appeared in 2014 and 2019, making the names and specifications of USB 3.0, UBS 3.1, and USB 3.2 more confusing and more difficult to be remembered. The following table is a summary for reference.

In 2014 when the renaming crisis appeared, a new USB-C interface was also released, to unify the previous chaos of USB interfaces. However, we should notice that USB-C was merely an interface, which has nothing to do with power supply, display, and transmission. The function that was truly affected was the USB specification.

Finally, USB4 – one of the protagonists in this article- was released in 2019. Luckily, there was no other renaming problem initiated, and its transmission speed can support 20Gbps. The maximum transmission speed was doubled once again, reaching 40Gbps. USB4 only uses a USB-C interface, and it can support PD up to 100W. In addition to its compatibility with USB 2.0 and USB 3.2 downwards, it also supports Thunderbolt 3/4. 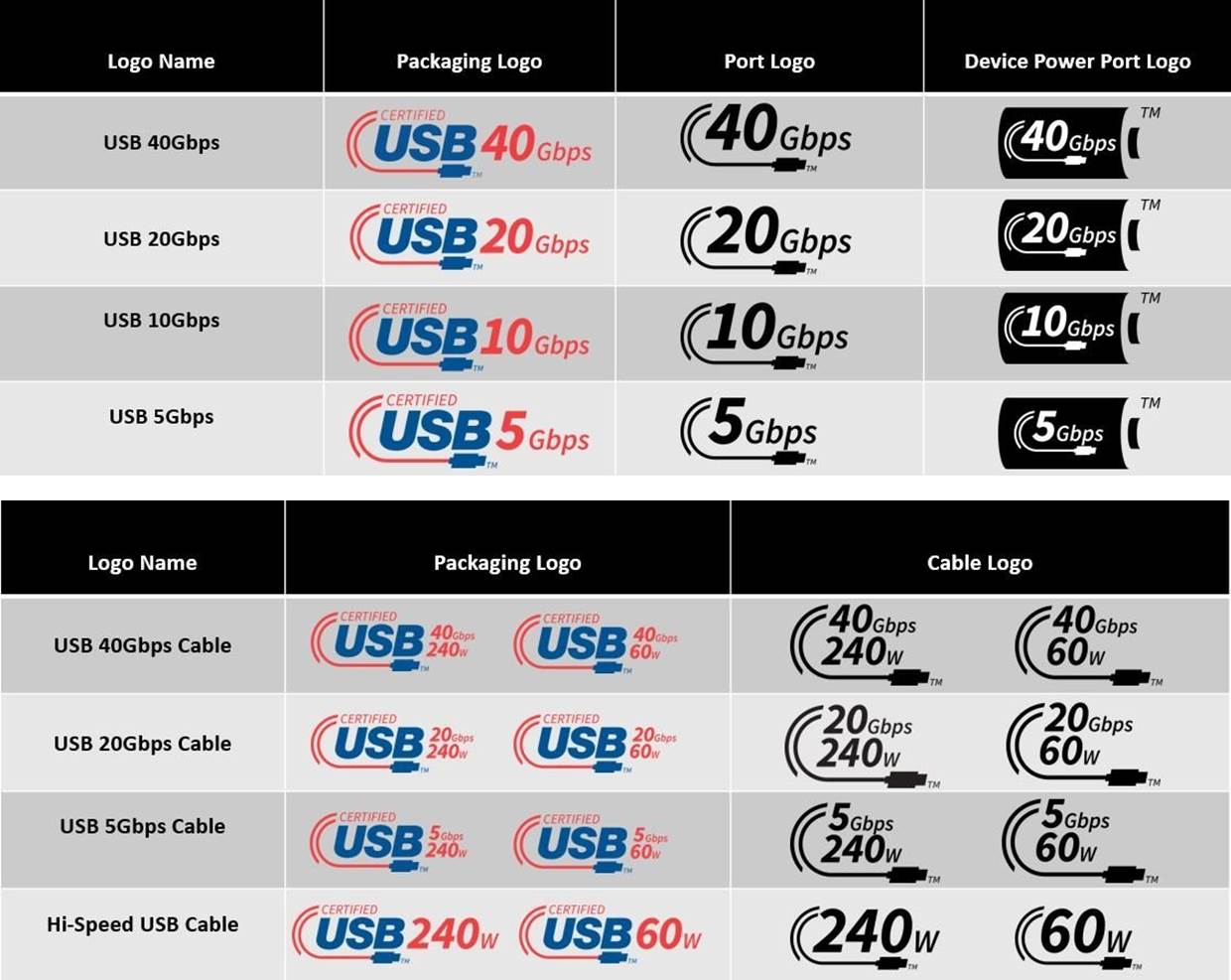 The Evolution of Thunderbolt™

Thunderbolt is a high-speed I/O interface developed by Intel in 2009. It is used primarily as the transmission cable between computers and other devices, replacing and unifying various interfaces connected to a computer.

The first generation of Thunderbolt was released by Intel in 2011. Its interface was integrated with Mini DisplayPort. The transmission speed could reach 10Gbps and it could be connected with a maximum of six peripherals through Daisy-chain.

Note: The interface and cable of Thunderbolt 1

Thunderbolt 2 was released in 2013, with its transmission speed doubled to be 20Gbps. Its interface is the same as the first generation; however, Mini DisplayPort was still used.

Thunderbolt 3 was released in 2015; the transmission speed was doubled again to reach 40Gbps. In addition, there was a major change in this generation. USB-C was adopted for its interface, with a maximum power supply of up to 100W, and it supports two 4K screens or one 5K screen. Thanks to its combination with USB-C, Thunderbolt 3 was even more popular than Thunderbolt and Thunderbolt 2. 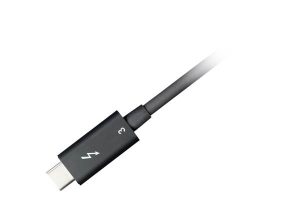 Note: The interface of Thunderbolt 3 has changed to be USB-C

In 2020, another protagonist of this article was released – Thunderbolt 4. Its interface is still USB-C, with its maximum transmission speed still reaching up to 40Gbps. However, in PCle bandwidth, Thunderbolt 3’s 16Gbps was upgraded to Thunderbolt 4’s 32Gbps, meaning that a significant increase in the transmission speed and efficiency can be seen in PCle devices, such as storage devices and external graphics cards.

Differences Between USB4 and Thunderbolt™ 4

From their appearances, both USB4 and Thunderbolt 4 use the same USB-C interface and support 40Gbps in terms of maximum transmission speed.  Both can also support image output and power supply up to 100W. Thus, it is very easy to get confused between the two. So, what on earth are the differences between USB4 and Thunderbolt 4? The most significant difference is the minimum specification requirement.

Although both can support maximum bandwidth up to 40Gbps, USB4 is divided into USB4 20Gbps and USB 40Gbps; its minimum specification is only 20Gbps, while Thunderbolt 4 is only 40Gbps.

Based on the charging power, both can support 100W at most, yet the minimum standard for USB4  has decreased to be 7.5W, while Thunderbolt 4 is 15W.

In terms of data transmission, USB4 should support a minimum of 10Gbps for USB3.2, while Thunderbolt 4 can obtain 10Gbps through USB3.2 or reach 32Gbps through PCle.

In terms of the monitors that they support, USB4 can support only one monitor but there is no minimum resolution requirement, while Thunderbolt 4 can support two 4K 60Hz monitors or one 8K 30Hz monitor.

In addition to the foregoing content, some functions are categorized as basic equipment for Thunderbolt 4 but optional for USB4. The following table is a summary for reference. 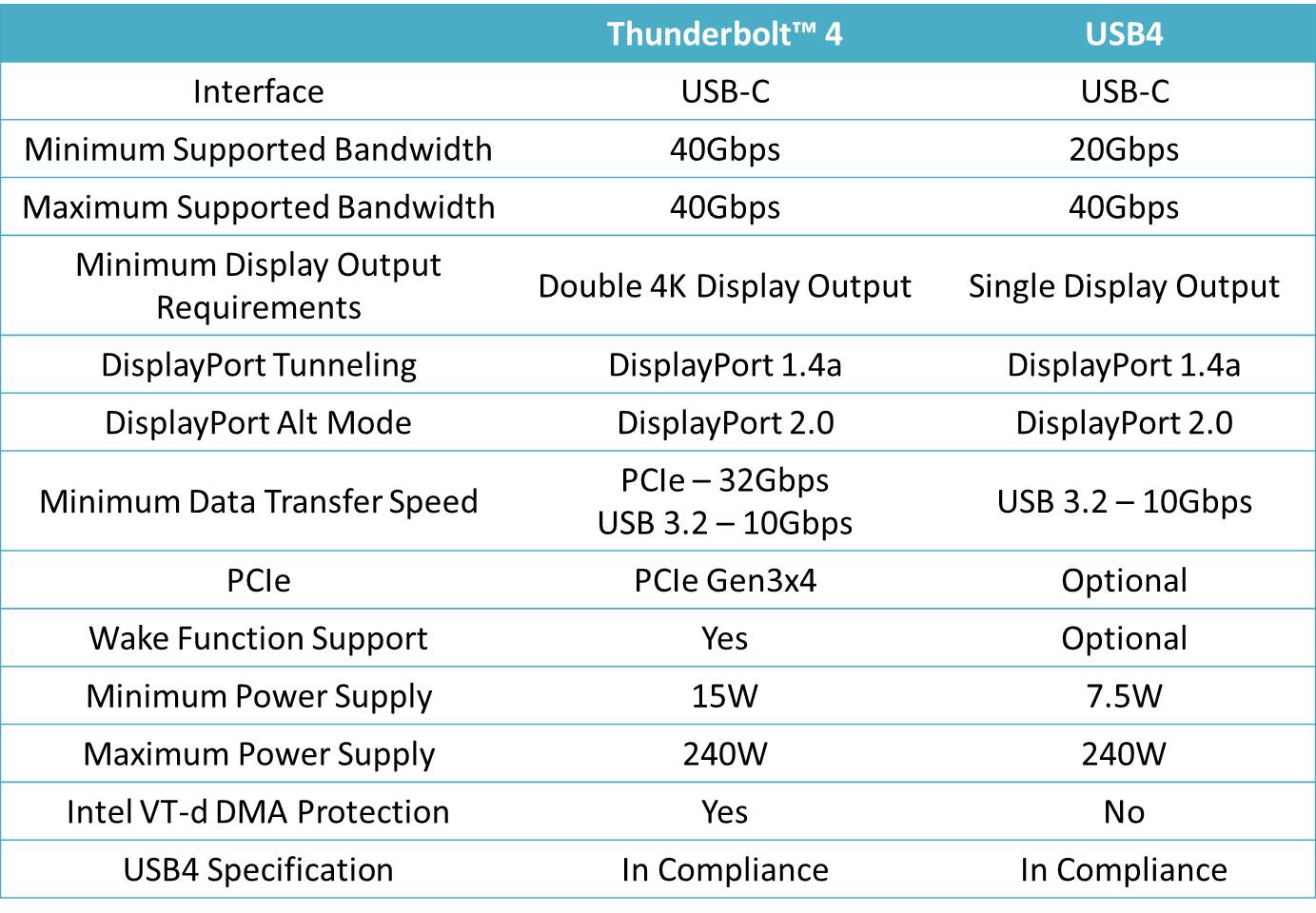 In short, Thunderbolt 4 and USB4 are very similar in terms of specifications; however, Thunderbolt 4 has higher minimum requirements compared to USB4 in order to ensure its basic performance. Also, Thunderbolt 4 can be compatible with USB4; however, but it will be optional for USB4 if it intends to support Thunderbolt 4.

Problems with USB4 and Thunderbolt 4

Both USB4 and Thunderbolt 4 have great functions and convenience, with USB-C serving as their unified interface. Only one cable is required to perform the functions such as screen display, battery charging, data transmission, etc. There are also various kinds of peripheral devices that can be used together. However, as they become even more convenient for users, many more problems related to product functionality and device compatibility may occur subsequently.

According to the statistics and analyses from Allion Labs’ big data database, the Bug Report related to USB4 is summarized in the following figure. The total categories of Bug Reports are always numerous, and the ones with higher proportions are 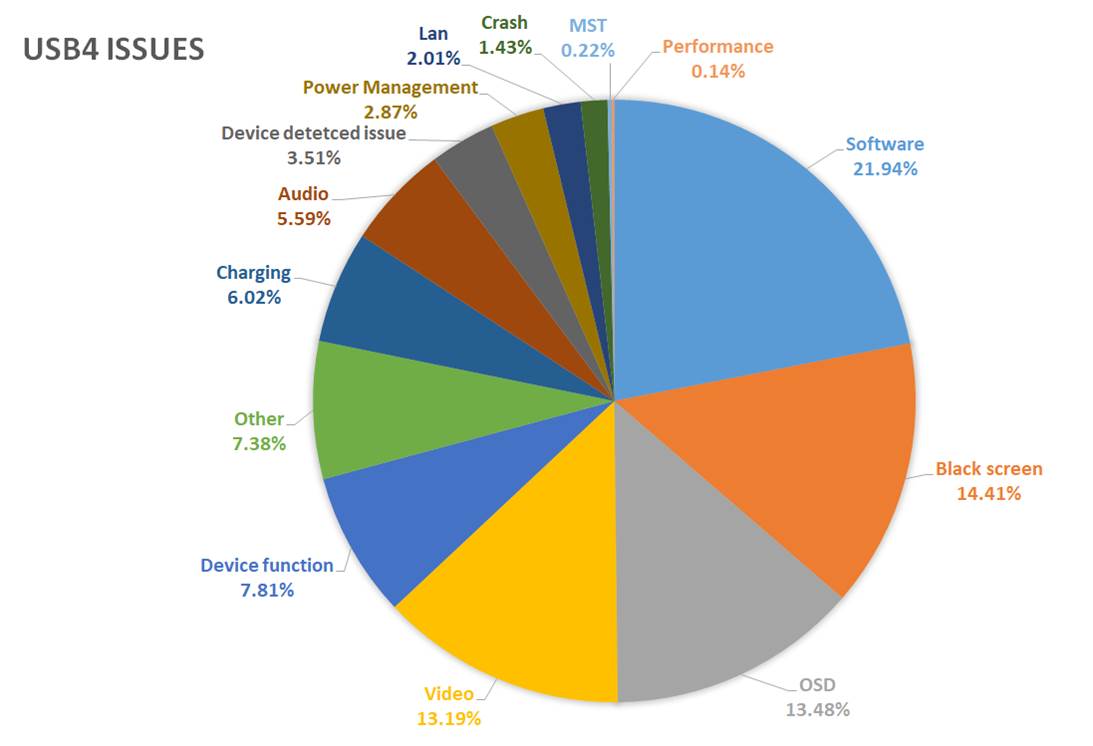 The Bug Report analysis in the test of Thunderbolt 4 is shown in the following figure, and the ones with higher proportions are 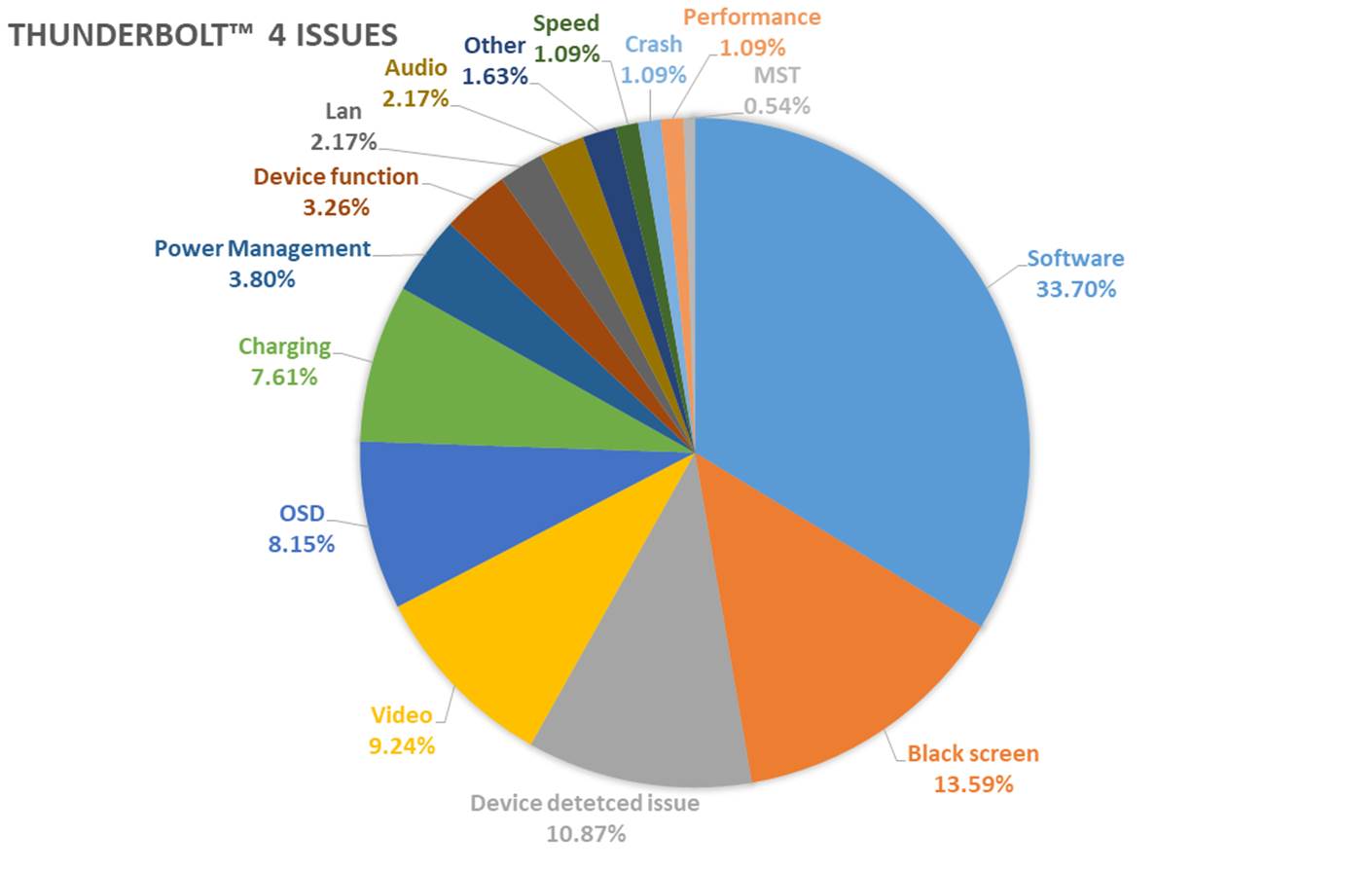 Based on the foregoing data analysis, the types of problems encountered by USB4 and Thunderbolt 4 are quite similar. The top ranking of the Bug Report is also similar.

The first bug problem is software related in both cases. For many of the USB4 and Thunderbolt 4 products, their own vendors usually offer corresponding Apps, so that users can operate them more easily. This may also extend the advantages of their products. However, when an App is still in an immature stage, many problems may appear. Also, some products can be used along with third-party Apps, which are likely to cause quite a few problems, of course.

The second bug is “Black Screen”, which refers to the inability of the screen to receive the signals sent by the system so that the screen cannot show any image. This is a very serious and common bug in Bug Report, so it is independently categorized from the Video category. This accounts for approximately 14% of the proportion in both USB4 and Thunderbolt 4, which can reflect such seriousness.

For USB4, the third bug is “OSD”, but it is the fifth one in Thunderbolt 4. OSD is the acronym for “On Screen Display”, usually referring to texts or images that can be displayed on the screen of a product in the category of monitors. Generally, it refers to the content appearing in the “Main Menu” on the screen. This is also one of the bugs that may be found in flat monitors.

For Thunderbolt 4, the third bug is “Device Detected Issues”, but it accounts for 3.51% of USB4. Since there are various types and brands of USB-C interfaces, the problem of compatibility is crucial. Thus, in this type of problem, the peripherals cannot be normally detected, so the type of equipment cannot be identified, which may affect its operation. 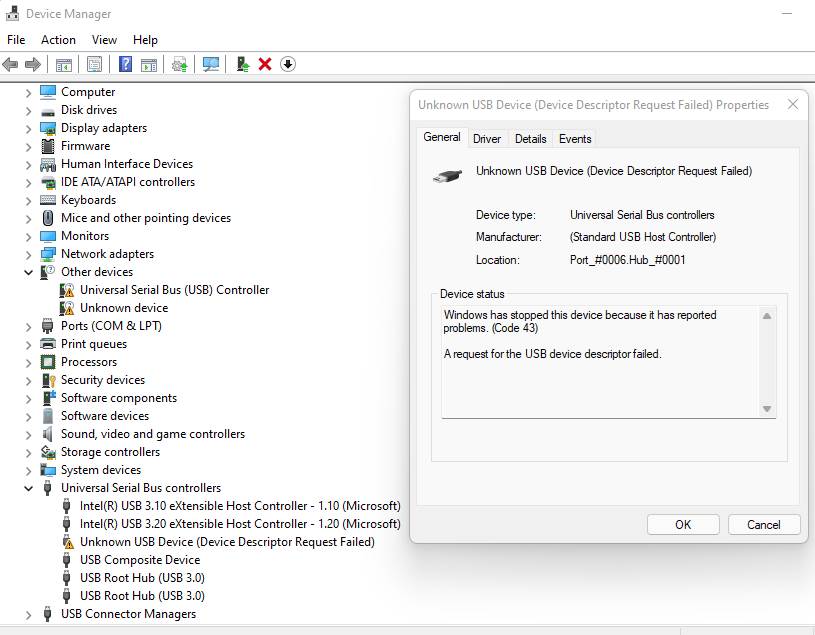 The number four bug in both USB4 and Thunderbolt 5 is “Video”; related bugs are shown on the screen. This includes image shaking, flickering, noise signals, and other abnormalities that are most likely to be observed by a user. As a result, it will directly affect a user’s trustworthiness in a product.

For USB4, the fifth bug is “Device Function”. Since there are various types and brands of USB-C interfaces, this category covers the functionality problems of different products. If we scrutinize the issue, we can obtain other subcategories, such as USB Hub, Touch function, KVM, LED indicator, etc., as well as the special functions and designs featured by various products.

In addition, “Power Delivery” is also a key function in USB4 and Thunderbolt 4, which is categorized as “Charging” in the Bug Report, accounting for higher proportions—6.02% and 7.62% respectively, which requires our special attention. 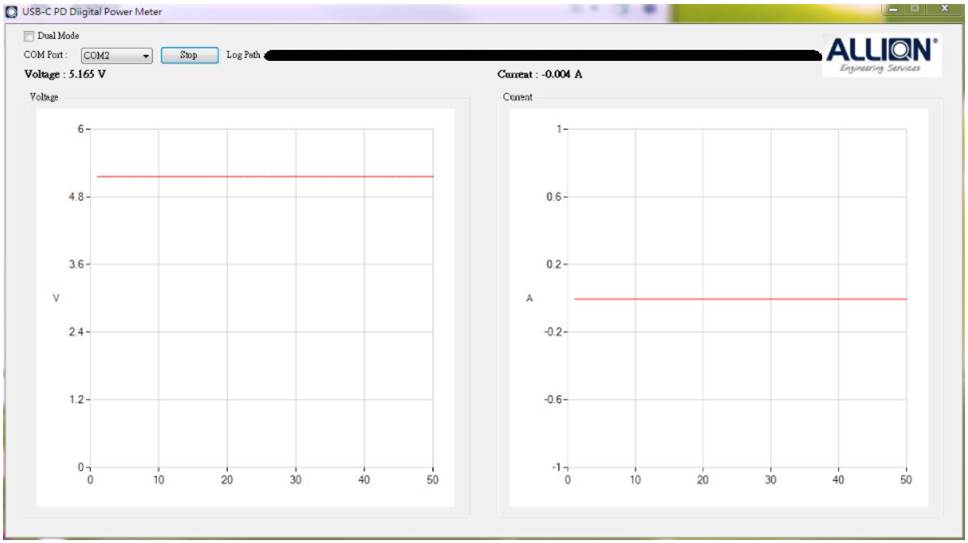 Test Types and Services of USB4 and Thunderbolt 4

In addition to the foregoing tests, we can also customize testing plans for your products, achieving the best testing results!

Allion Labs has all sorts of products and equipment related to USB4 and Thunderbolt 4, with a total of more than 3000 devices including the categories such as system, monitor, mobile phone, tablet, docking, adapter, keyboard, mouse, headphone, pen drive, external hard drive, power bank, player, etc., covering most of the brands commercially available on the market! Allion Labs has confidence in safeguarding the quality of your products!

Post Views: 98
Technical
Latest technical blog
This site uses cookies. By continuing to browse the site you are agreeing to our use of cookies. OkFind out more here