SAS is the abbreviation of Serial Attached SCSI, which belongs to the point-to-point serial protocol and is used to replace the early Parallel SCSI. In the computer field, data access between a computer and a storage device, such as a hard disk, a CD-ROM, etc., is often used. The transmission rate, or data rate, has risen from SAS-1 3.0 Gbps to SAS-4 22.5 Gbps (also known as 24G). The next SAS-5 will increase the transmission rate to 45 Gbps, which is still under development.
In addition to supporting SATA, SAS itself can also support PCIe. Currently SAS-4 supports PCIe 4.0 Lane x 4. The following table shows the interface names of various storage devices supported by SAS and the corresponding organization specifications: 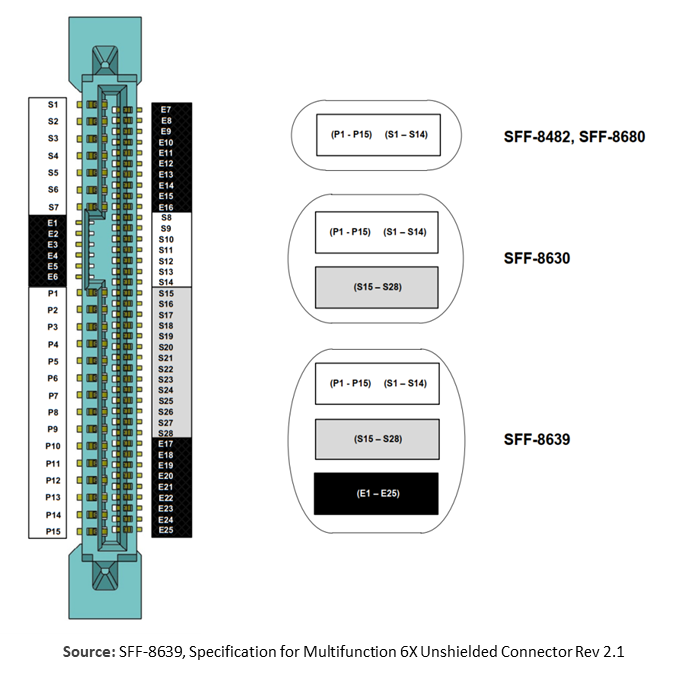 For pinouts that support each interface, please refer to the SFF-9639 specification. The following table is the high-speed signal part of the capture: 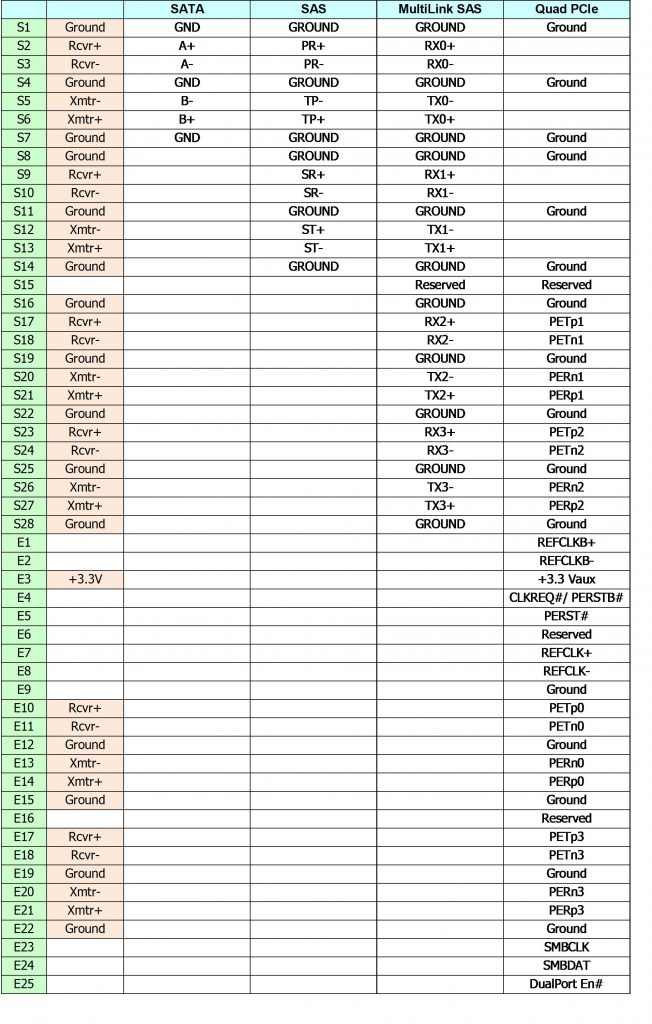 Next is the Slim SAS. Though much smaller than the original standard connector, it reduces the footprint and form factor while improving the performance of signal integrity (SI), especially in near-end crosstalk (NEXT) and far-end crosstalk (FEXT). The plug ends are connected to each other with ribbon cables for signal transmission, and there will be better air flow on the server, which improves the cooling capacity of the server.
The following figures are the appearance diagrams of Slim SAS 4X and 8x respectively. Connectors have 90-degree (Right Angle) and 180-degree (Vertical/Straight) styles: 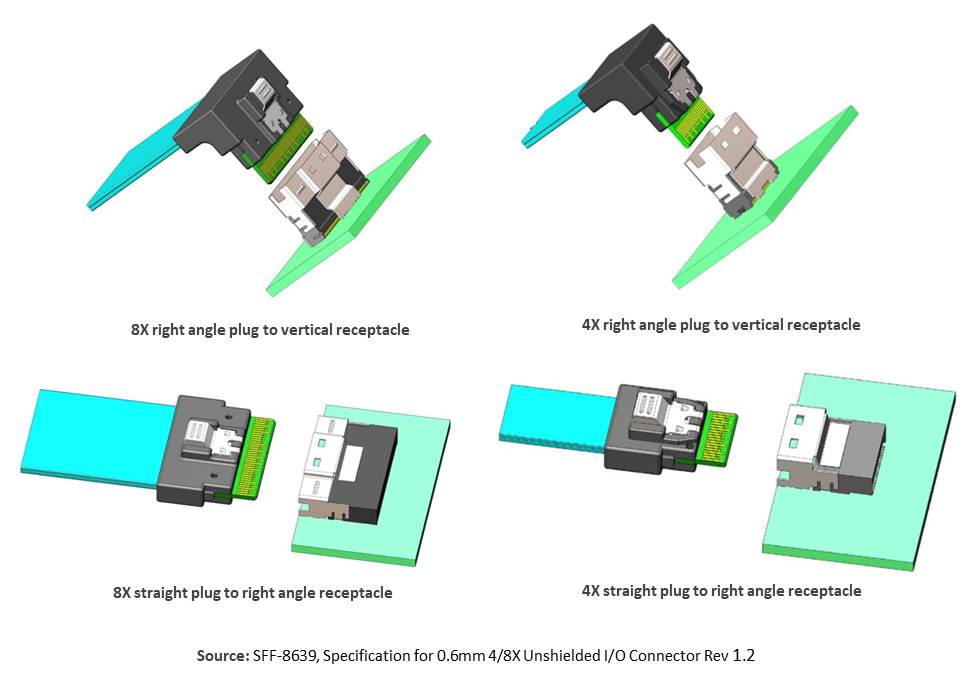 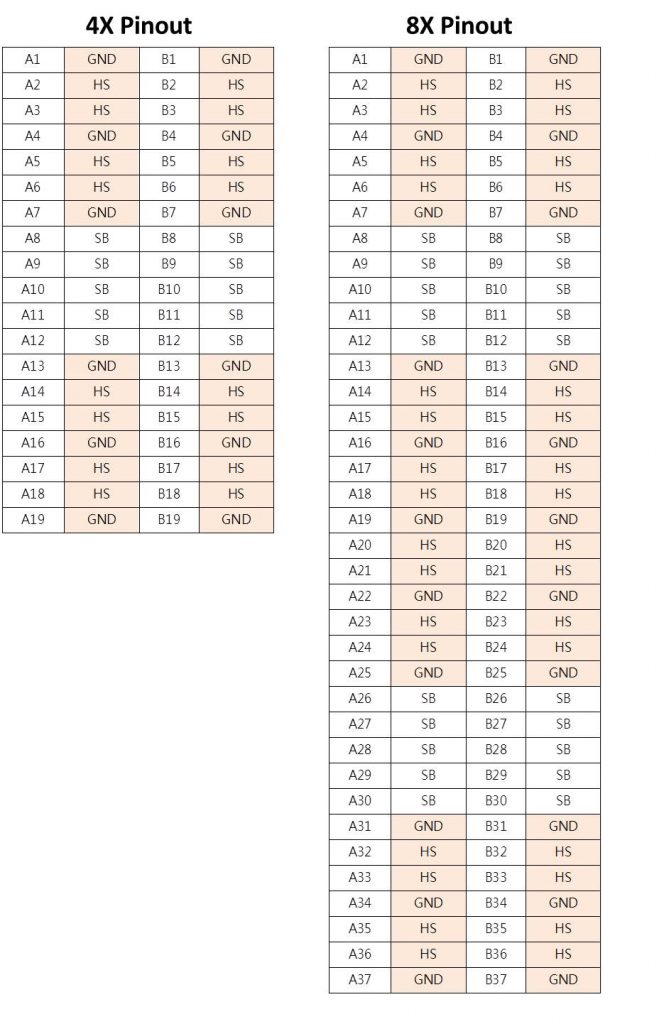 Finally, it is still necessary to understand the SI high-frequency characteristic requirements of the connector itself. The test of highest frequency is not calculated as 22.5 Gpbs * (1/2) = 11.25 GHz, but rather 22.5 * (3/4) = 16.875 GHz. In addition, the SI limit specification curve of SAS-4 also includes the characteristics of the fixture itself, as shown in the figure below (the characteristics of the fixture are defined separately in the specification INCITS 534): 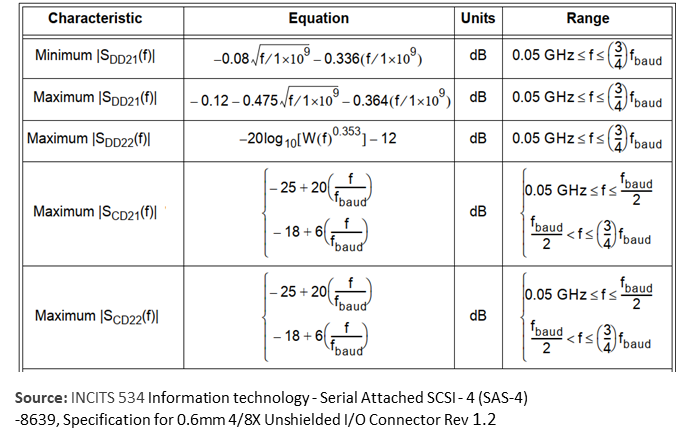 So far, high-speed transmission has been upgraded to the next generation with twice the transmission rate. Faced with this challenge, the connector size has also begun to shrink as a response. In addition, it is a challenge for SI to provide higher transmission capacity by adding lanes. Furthermore, it needs to be compatible with other interfaces (such as PCIe). These three features/capabilities have become basic requirements for high-speed connectors.

For more information on the SAS4 Connector, please feel free to contact us at: service@allion.com