The Set-Top Box Series: Antennae and their anti-interference performance

Last time, we compared set-top box (STB) compatibility and the wireless network speed performance. This time, we will compare the wireless efficiency performance of the STB by using different antennae.

More than 80% of modern wireless network equipment uses two antennae (Main and AUX); however, due to the cost and design considerations, some manufacturers use only one antenna for their product design. In general, the transmission capability of two antennae is twice as fast as one antenna. Still, not all products are required to have high-speed transmission capability, as one antenna can meet the needs of smart speakers, smart home appliances, or other IoT equipment.

This article is a comparative review of the products with actual data, which is analyzed to assume the end-user’s experiences with the products.

As there are not many STBs with one antenna available in the market, with the help of our collaboration partner, we used sample products with one and two antennae as the objects of this experiment.

Figure 1: The external appearance and antenna specification of the tested products.

The following are the testing items

To avoid other external interference that may affect the experiment data, all testing is conducted in an RF-shielded room. First, the items for testing the maximum throughput aim to confirm the maximum transmission and reception abilities of the STB. As the main purpose of STBs is to access online video streaming, this product should at least be capable of meeting the minimum demand for watching online video streaming. We have compiled the connection speed demand of different media and video services, which are listed in the following table: 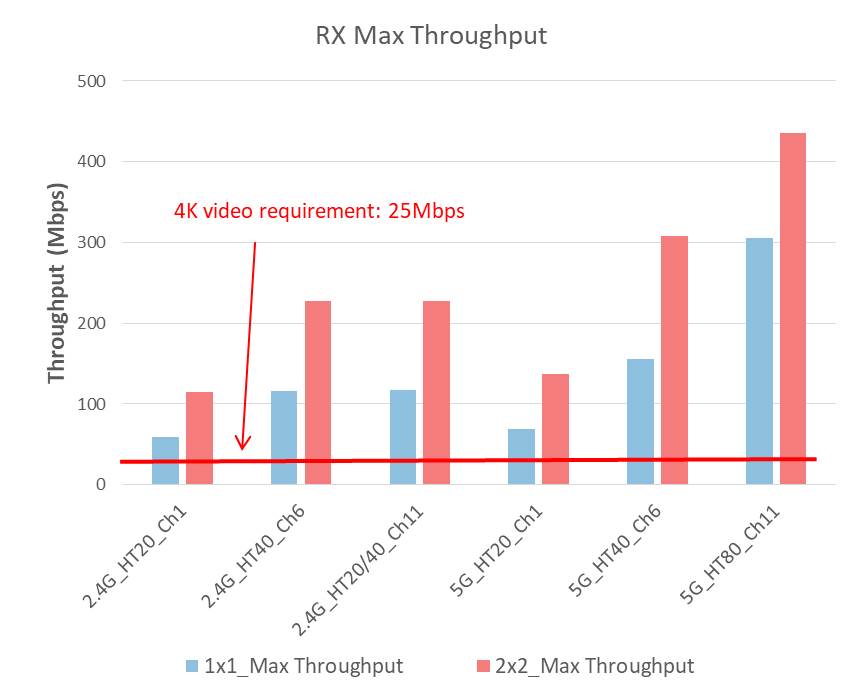 The results of the upload speed are similar to the download speed; however, upload speed is not often applied in products like STB. 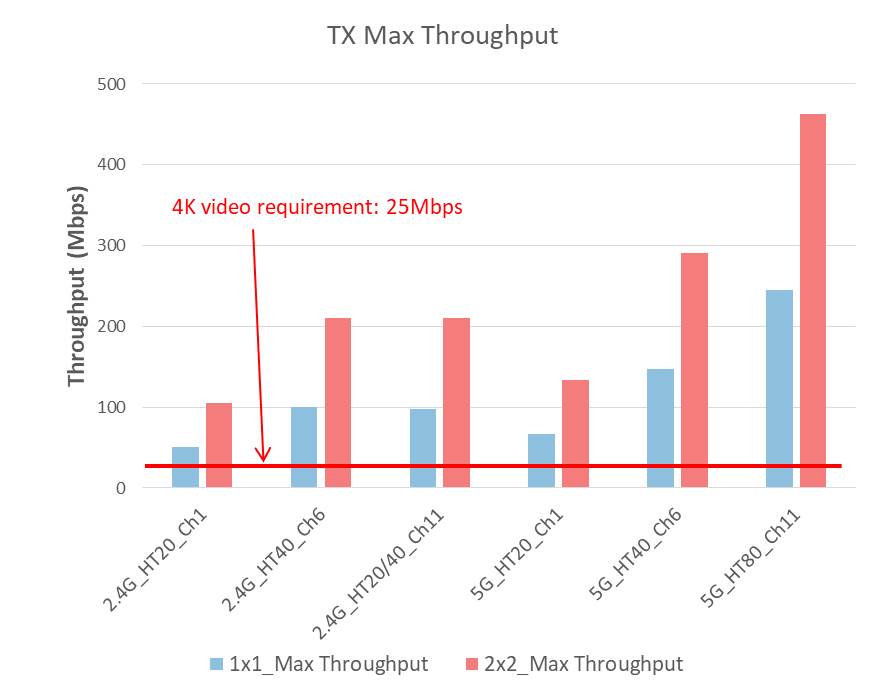 After we learned the maximum transmission capabilities of 1×1 and 2×2, we next performed testing of the wireless transmission flow and distance. The wireless signal strength was altered through an attenuator to simulate the different distances. A greater attenuation value indicates a farther distance between the STB and the wireless base station. We gradually increased the attenuation value until the STB failed to receive signals from the wireless base station. The results of the testing with the two STBs are shown in the following images.

We used a simulator to create signal interference of 20%, 60%, and 80% (to simulate extremely congested environments). As shown in the following images, data in compliance with the theory were obtained. The transmission ability of the two STBs (1×1 and 2×2) decreased in a congested wireless network. However, even in a highly congested environment, the transmission speed of the two STBs still fulfilled the requirements for 4K quality. When connected to the 5GHz band, the speeds were even faster.

Lastly, regarding the antenna pattern (OTA TRP/TIS) of the STB, the test results are shown in the following comparative diagram. Based on the conclusion, the Wi-Fi OTA performance of 2×2 was better than that of 1×1. The TRP of 2×2 was almost 3 dB higher than the 1×1 TRP because the larger number of antennae has improved OTA performance. The results also comply with the previous test conclusions.

Take the Next Step

This wraps up our review regarding the correlation between STB antenna numbers and wireless connection performances. Of course, many other STB features can be tested, such as the quality of the sound and image, the accuracy and sensitivity of the remote controllers, and many mnore.

If you want to learn more, please check out our smart entertainment test solutions, wireless AP/AP/Router test solutions, and RF Wireless Lab. You may also fill out an inquiry form or email us directly for more information.

SCHEDULE CONSULTATION
Post Views: 277
Technical
Latest technical blog
This site uses cookies. By continuing to browse the site you are agreeing to our use of cookies. OkFind out more here